Why Brown Liquor Gives You The Worst Hangover According To Science 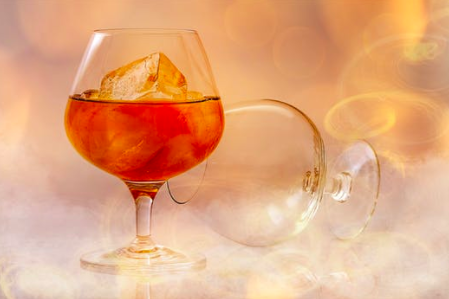 There is real research behind it.

There’s a saying in Russia: If a person drinks “the right way”—meaning he only drinks vodka, and he drinks it neat—he can’t get a hangover.

If that sounds ridiculous to you, you’re right to be dubious. Experts who study alcohol say the pure alcohol (or ethanol) in a drink is the primary driver of a hangover, whether you’re sipping straight vodka or a Long Island iced tea.

But even novice drinkers recognize that, shot for shot, brown-hued booze seems to produce worse hangovers then its clear counterparts. And there’s research to back up that conventional wisdom.

In a 2013 study, researchers from Brown and Boston University recruited 95 “heavy” drinkers—both men and women—and had them imbibe either bourbon or vodka until their BACs hit 0.10, which meets the legal definition of “intoxicated.” The next morning, hangovers were 36 percent worse among the bourbon drinkers, according to a scientific “hangover index” the researchers used to assess symptoms like thirst, headache, nausea, and increased heart rate.

Why is brown liquor bad news for your morning-after? The study authors speculated that “congeners”—complex organic substances that help give alcoholic drinks flavor—are to blame. Congeners include compounds that leach from wood casks during aging, as well as tannins and other additives found in many dark-colored alcoholic drinks.

Along with congeners, “there are various components in alcoholic beverages that contribute to hangover,” adds John P. Cullen, a research associate professor at the University of Rochester Medical Center in New York. He mentions yeasts, sulfites, and other additives commonly found in liquor—but also in beer and wine.

“Your body could react to some of these organic compounds with a mild allergic reaction, or inflammation, which could increase your hangover the next day,” he explains. Also, the breakdown products your system produces after “metabolizing” many of these ingredients could also contribute to your hangover symptoms, he says.

While there’s not much hard data to prove it, Cullen says the more of these ingredients a drink contains, the worse your hangover may be. This also helps explain the lack of association researchers have found between hangovers and dehydration. (While it’s true drinking can dehydrate you, and that dehydration may slightly factor in to your hangover symptoms, most alcohol experts agree pounding water or Gatorade won’t relieve a hangover.)

So if you’ve ever wondered why an unfiltered ale seems to hit you harder the next day than a light lager—or why that supper-tannic red wine gave you such a nasty headache—now you have a better idea.