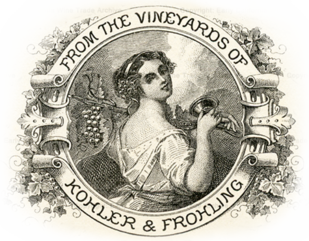 Kohler & Frohling, which was arguably America’s most famous winery before Prohibition, is once again available.

Before Grgich, before Gallo and even before Mondavi, American wine was synonomous with Kohler & Frohling.

In the early days of the California wine industry, few brands were better recognized than the firm, which touted itself as the “pioneer wine house” on its letterhead.

Started in 1854 by two German musicians who knew nothing about grapes or winemaking, Kohler & Frohling rose to become one of California’s dominant wine companies. It not only made red, white and fortified wines from its vineyards in Los Angeles and Sonoma County, but opened San Francisco’s first tasting room on Montgomery Street to show them off.

In 1860, Kohler & Frohling was also the first winery to ship California wine around the Horn to New York City. Few people on the East Coast had then ever tasted West Coast wine; it was regarded as a novelty item. Ohio was then, unbelievably, the largest producer of American wine.

When members of the Farmer’s Club sampled a few California bottles—some sent by Kohler & Frohling—in a building on lower Broadway in June 1862, they were favorably impressed. “I think the samples shown today prove that America is capable of producing its own wine, and that we are really independent of the wine countries of Europe,” read the tasting notes of a 58-year old.

Now 97 years after Prohibition forced the name Kohler & Frohling into the history books, a great-great-grandson of Charles Kohler is reviving the brand. Bert Sandman, who made his fortune building roads and highways in northern California, has renewed the firm’s lapsed trademark and bottled a zinfandel using Kohler & Frohling’s historic “Best Zinfandel” label. Sandman hopes it is just the first step in returning the company to glory and prominence.

“I love the family history,” said Sandman, who lives near Sacramento. “I want to leave a legacy to my descendants.”

Sandman grew up hearing tales about Kohler from his great grandmother, Emma Kohler Bertleau, who lived in San Francisco. He remembers her telling him about her family’s trips to its famed Tokay Vineyard in Glen Ellen in Sonoma County. Phylloxera later destroyed the vines and the writer Jack London acquired the property in 1911.

“I was intrigued by the stories of my ancestors,” said Sandman. He attended UC Davis starting in 1966 with the intention of majoring in viticulture and enology so he could resurrect the family wine business, but took a detour into construction. It took him almost 40 years to get back to his childhood dream.

Sandman has sought to retain the spirit of the Kohler & Frohling wines by being as true to its origins as possible. His winemaker is Jim Mirowski, the owner of Treasure Island Wines, located on a man-made island in San Francisco Bay, but within the city’s boundaries. That was important to Sandman since his ancestor’s headquarters were also in the city.

Mirowski used wine made from organic, dry-farmed zinfandel grapes grown on Sonoma Mountain just about three miles from the family’s former Tokay Vineyard. Mirowski crafted the wine in a restrained, European-style, not California’s typical fruit-forward approach. It sells for $32. Future wines from the new Kohler & Frohling brand will also come from Sonoma County grapes, and will include a Sauvignon Blanc.

Although Kohler & Frohling’s initial production is only 25 cases, its entry into the market instantly positions it as the “oldest” wine producer in California. And in a state crowded with wine brands vying for attention, history can be a selling point. Just ask Jean-Charles Boisset, the flamboyant Frenchman married to Gallo heir and winemaker Gina Gallo. In 2011, his Boisset Family Estates purchased the historic Buena Vista Winery, founded in 1857 and located just ten miles away from the old Tokay Vineyard.

Boisset restored and retrofitted the stone buildings, installed a museum of historic wine tools, and put the winery’s history front and center. Now visitors to the winery can “meet” its founder, a Hungarian named Agoston Haraszthy, who called himself “Count.” An actor dressed in frock coat and hat regales people with tales of how Haraszthy created “California first premium winery,” brought some of the first European grape varietals to the West Coast, and then met an untimely death when he was eaten by alligators in Nicaragua in 1869.

But not all consumers will necessarily be impressed by Kohler & Frohling’s legacy story—especially since the family was out of the winemaking business for a few generations—but others might be, said James T. Lapsley, an adjunct associate professor in the department of viticulture and enology at UC Davis and the author of a history of Napa Valley. Wineries are always looking for ways to differentiate themselves, and the company’s roots dating to the mid-1850s could strike a cord in some.

“It’s a crowded marketplace,” said Lapsley. “If you can claim a longer family history that’s an interesting story.”

A side aim of Sandman’s is to make Americans more aware of the robust history of wine in California before Prohibition. “My desire is to recreate our family brand to help tell the story of California’s rich heritage,” he said. Winemaking got its start in the California mission system, but really took off after the missions were secularized by Mexico in 1833, freeing up vast tracts of land. The heart of winemaking in the middle of the 19th century was Los Angeles, nicknamed then “The City of Vines.” The demand for fresh grapes and wine intensified when hundreds of thousands of people streamed into California to hunt for gold.

In fact, it was the novelty of a cluster of fresh grapes that pushed Kohler and Frohling into the wine business. Lore has it that the pair was on a picnic in San Francisco 1853 when a friend pulled out some grapes that were so luscious it prompted the men to vow to make wine. Soon, Frohling was on his way to Los Angeles to scout out a vineyard. The fledgling company made a few hundred gallons of wine in 1854, and the men still had to rely on their musician’s income—Kohler played the violin and Frohling the flute—to survive. But the business grew quickly, especially after the pair started buying and crushing grapes from other Los Angeles-area producers.

John Frohling died unexpectedly in 1862 at the age of 35, but Kohler continued to expand, acquiring the Tokay Vineyard in 1874. By 1876, the firm could claim that their wines were available in almost every middle size American city, according to Thomas Pinney, a wine historian. “It might be in fact said that the real commerce in California wines begins with the advent of Kohler & Frohling,” Pinney wrote in his A History of Wine in America.

Charles Kohler died in 1887 and left his sons to run the company. They constructed a magnificent turreted brick building with a three-million-gallon capacity cellar in San Francisco’s south of Market neighborhood in 1890. But a glut of grapes and a severe national economic downturn prompted the firm to join forces with six other wine houses in 1894 to form the California Wine Association (CWA). The CWA eventually gobbled up wineries and vineyards around the state (but allowed them to continue operating under their own brands) and became a monopoly that controlled 80-percent of the production and distribution of wine in California. The Kohler & Frohling building served as its headquarters until it was destroyed in San Francisco’s 1906 earthquake and fire.

Although Sandman has dreamed about recreating his family’s brand for much of his 68 years, he is realistic that he will never become as well known as Kohler & Frohling once was. For now he is content to roll out his wines with their historic labels and tell the family history—and sell its wine.

“I think the Kohler and Frohling story is an important one to tell in large part because of the firm’s and maybe to a greater degree, Charles Kohler’s, contribution to the industry,” he said. “The transition from gold mining to industry and agriculture is a significant part of the history of this great state.”