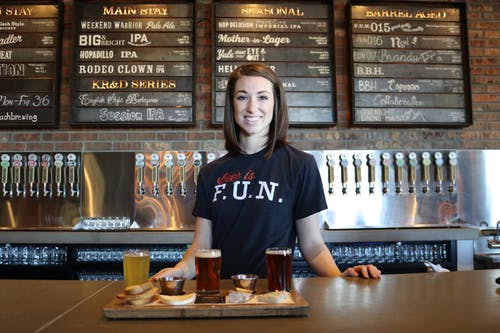 Whether your cocktail is a classic martini, gin & tonic or a Hanky Panky, an enterprising woman helped the drink make its way into your hand.

“It’s no coincidence that a woman was chosen as the symbol of the gin craze in the mid-1700s,” says Dr. Nicola Nice, the founder of gin liqueur Pomp & Whimsy. She references such nicknames for the spirit as Mother Gin and Madame Genever, as well as the later, less-flattering moniker, “Mother’s Ruin.”

Compared to beer, which was available in male-run alehouses, “gin was sold and consumed in places where women went, like markets and the backrooms of household good[s] stores,” she says. “More importantly, women didn’t just drink gin, they sold it, too.”

How Women Shaped Whiskey History
It’s high time to pay homage to the women who helped pave the way to advance the spirit. From a 17th-century British noblewoman to modern mixologists, here is a timeline of some of the world’s most esteemed gin advocates.

Mary of Orange (1631–1660)
Also known as Mary Stuart, the eldest daughter of King Charles I of England, she married Dutch nobleman Prince William II of Orange in 1641. Part of her legacy, says Keli Rivers, brand ambassador for Sipsmith Gin and a gin history expert, was to help popularize genever—regarded as the forerunner of gin—in England.

“It wasn’t the first time we saw [gin] in England, but it was the first time we celebrated it,” says Rivers. An English blockade against French goods meant dwindling supplies of French brandy. In its absence, “Dutch courage” (genever) became the drink of choice at William and Mary’s court.

After Mary’s death, The Distilling Act was passed in 1690 by the British parliament. It made it legal for anyone to distill, as long as they paid an excise duty to the government. “It was the beginning of the gin craze in England,” says Rivers.

Queen Anne (1665–1714)
In 1702, Anne succeeded William III of England (also known as William of Orange, Mary of Orange’s son), and was an enthusiastic booster of genever, and especially gin. She encouraged consumption among the British people and government ministers alike.

Anne increased gin production inadvertently when she canceled the charter that Charles I had issued to the Worshipful Company of Distillers, which granted it sole rights to distill in and around Westminster and London. Hundreds of small unlicensed distilleries sprung up. Cheap, potent gin soon flooded the market.

Coley was known for her cheery disposition and the many celebrities she served, from Mark Twain to Charlie Chaplin. Today, she’s also remembered as the creator of the Hanky Panky, a cocktail made with gin, sweet vermouth and a few dashes of Fernet Branca.