The Sweeter Side of Bordeaux

Bordeaux has another face that the wine world sees and may not readily associate with the broader wine producing region. Sauternes and Barsac, which lies within Sauternes. Like most of the Bordeaux wine region, Sauternes has a maritime climate which brings the hazards of autumn frost, hail and rain that can place an entire vintage in ruin. Sauternes is located 40 km southeast of the city of Bordeaux along the Garonne river and its tributary, the Ciron - which has cooler waters than the Garonne because of it’s source from a spring. Sauternes, a sweet wine, is produced from Semillion, Sauvignon blanc and Muscadelle grapes that have been affected by Botrytis cinerea, know as noble rot, which causes the grapes to become partially raisined, resulting in a concentrated and distinctively flavored wine sought by many gourmands and connoisseurs who appreciate the finer things in life.

While viniculture is believed to have been introduced into Aquitaina by the Romans, it was the Dutch traders of the 17th century who first developed an interest in the wines of Sauternes and Barsac. The Dutch had been active in trading German wines but the production of German wine fell off in the 17th century as beer rose in popularity. The traders saw an opportunity for new production sources in Bordeaux and started investing in the planting of white grape varieties and introduced German winemaking techniques to the region. They began to identify areas that well suited for white wine production and found Sauternes to be an excellent source. The local producers kept the use of Botrytis a secret. After all, who would want to drink wine that was infected by rot. Little did they know. By the 18th century, winemakers used nobly rotted grapes in Germany and Tokaji and, it seems, the “secret” was out of the bag. By the end of the 18th century the region’s reputation had grown in stature and was internationally known. Thomas Jefferson was an avid fan and recorded that after tasting a sample of Chateau d’Yquem, President George Washington immediately ordered 30 dozen bottles.

Sauternes is comprised of five communes - Barsac, Sauternes, Bommes, Fargues and Preignac. All five are allowed to use the name Sauternes. The Barsac region is also permitted to label their wines under the Barsac appellation. Generally speaking, Barsac wine is drier and lighter bodied than Sauternes. Sauternes producers also make a dry white wine in years where the noble rot does not develop and label them under the generic Bordeaux AOC classification. To meet the qualifications for the Sauternes label, the wines must have a minimum of 13% alcohol and pass a test to meet sweetness standards.

The classification of Sauternes and Barsac took place in 1855, at the same time the wines of the Medoc were classified. However, while the red wines from the Medoc were classes into 5 levels, the sweet white Bordeaux wines were classed into only three levels, Premier Cru Supérieur, which was reserved solely for Chateau d’Yquem, Premier Cru, which is essentially a First Growth and Deuxièmes Crus, which are Second Growth wines. 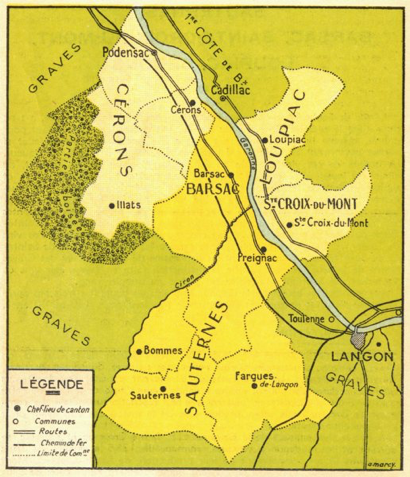 Sauternes are some of the longest-lived wines, having the potential to age for 100 years or more. They exhibit a balance of sweetness with a zesty acidity which makes them excellent food pairing wines. Honey, apricots, peaches and warm notes of roasted nuts are typical favor indicators. They darken as they age and eventually reach a rich cooper color exhibiting great complexity and a mature taste. Sauternes can be paired with many foods. Try one with Foie Gras for a classic pairing…

Maximum and Minimum Temperatures in Sauternes