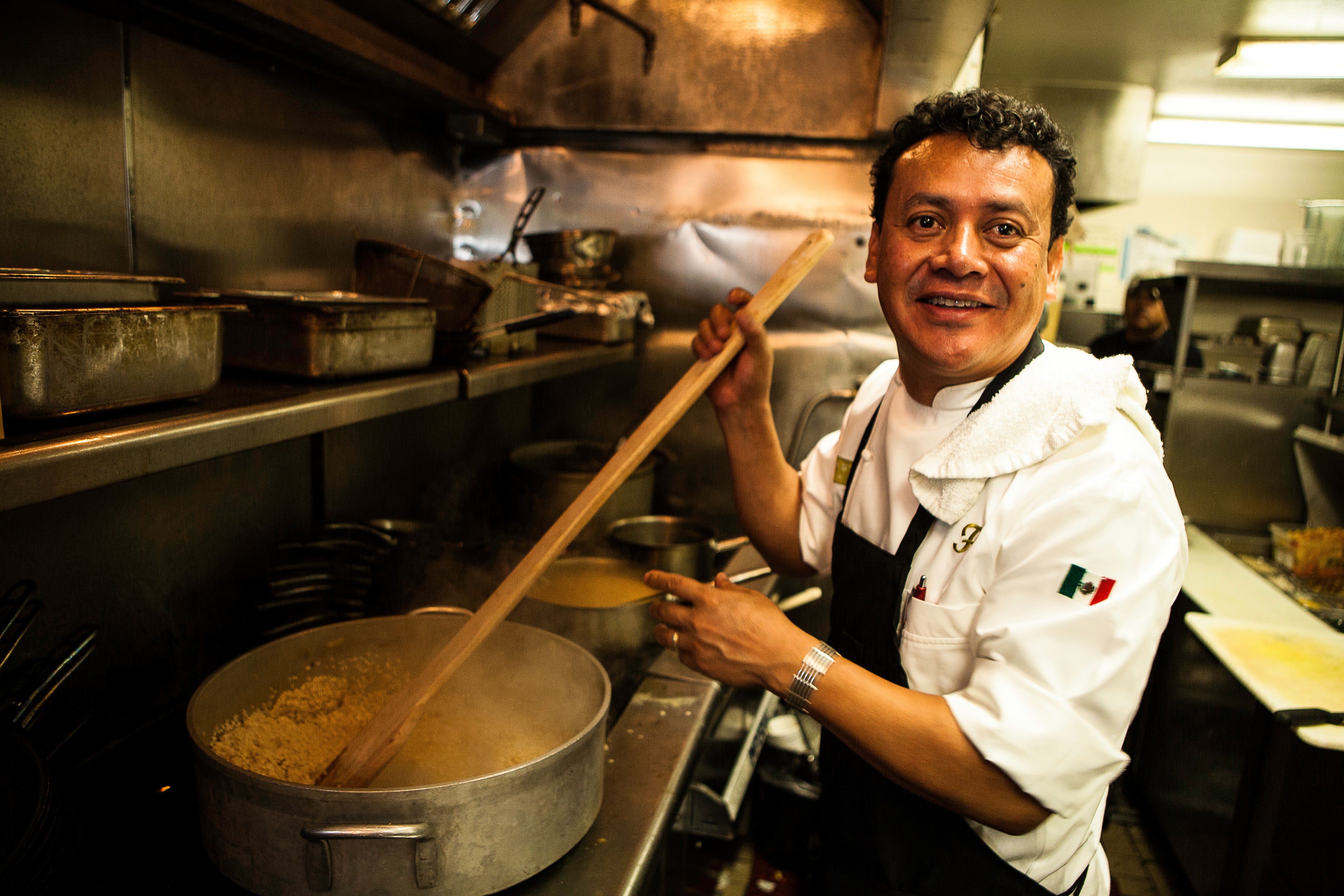 This story of one Chef's Journey to success is an inspiration to all of us who make the food and beverage profession our livelihood.

Hugo Ortega is executive chef and co-owner of four of Houston's top restaurants - Backstreet Cafe, Hugo's, Caracol and Xochi, and winner of Best Chef: Southwest at the prestigious 2017 James Beard Foundation Awards. (He was a finalist for the award for six consecutive years, 2012- 2017.) Ortega has been recognized locally, nationally and globally for his inspirational story and his passion for sharing traditional Mexican cooking and culture.

Ortega’s American Dream story started at Backstreet Cafe, a neighborhood bistro started by Tracy Vaught in 1983. He began his career in the restaurant business first as dishwasher and busboy and later as a line cook before graduating from culinary school and later becoming Backstreet’s executive chef. He and Vaught married, and together, they have created an award-winning Houston restaurant family that also includes Hugo’s and Caracol.


Ortega was born in Mexico City, the oldest of a family of eight children. At 15, he began working at one of several Procter & Gamble factories in Mexico to help support his family. In 1984, he immigrated to Houston with no contacts or job leads, but determined to make a life for himself in America. Slowly, step-by-step, Ortega began to set down roots in the bustling oil capitol. He shared an apartment with several friends, and followed up on leads for jobs in nearby restaurants. He was happy to find his first job, as a dishwasher, at a popular bar and nightclub. While the pay was meager, Ortega grabbed at the opportunity to learn the fundamentals of the restaurant business and find contacts to help him improve his English.

Later, Ortega cleaned the floors in office buildings to supplement his income. With an unexpected turn of bad luck, his roommates moved to California and he lost both of his jobs. He had no income and no place to live. A friend asked Hugo if he wanted to wash dishes and Hugo jumped at the chance. The friend took Hugo to Backstreet Cafe, and this is where the turning point of his life happened.

Ortega worked hard, and showed an interest in working in the kitchen. In Mexico, he learned cooking from his mother and grandmother. Ortega was given a position on the line in the Backstreet kitchen, and he continue to advance from there. Impressed by his hard work and dedication, Vaught offered to enroll Ortega in the Culinary Arts program at Houston Community College. He jumped in with both feet.

Ortega graduated from HCC’s Culinary Arts program in November 1992 and assumed the role of chef at Backstreet Café, then executive chef in 1995.

Ortega is passionate about sharing the traditional foods and culture of his native Mexico with diners. In 2002, he opened the critically acclaimed Hugo’s, which brought Authentic Regional Mexican Cuisine to the forefront of dining. In 2013, the Ortega and Vaught opened their third concept, Caracol, a Mexican coastal kitchen highlighting the richness of seafood found along Mexico’s 16 coastal states; and in January 2017 they opened Xochi, which celebrates the flavors of Oaxaca, Mexico, in the new Marriot Marquis Houston Downtown.

Ortega has made three guest chef appearances at the prestigious James Beard House in New York City; and was named “Up-and-Coming Chef of the Year” in 1999 and Chef of the Year in 2012 and 2002 at the Houston Culinary Awards; among other accolades. His restaurants have been named “Top Table” by Bon Appetit; Best Restaurants in America by Eater, one of Houston’s Four Top Latin Restaurants by Forbes Travel Guide, included in “What Makes Houston’s the Next Great American City?” in Smithsonian Magazine, among others.

Ortega is author of two cookbooks - Hugo Ortega’s Street Food of Mexico, published in fall 2012 and selected by Saveur magazine as one of just six “essential Mexican cookbooks”; and Backstreet Kitchen: Seasonal Recipes From Our Neighborhood Café, to celebrate Backstreet Cafe’s 30th anniversary.

When he is not in the kitchen, Ortega enjoys traveling, spending time with family and spinning.