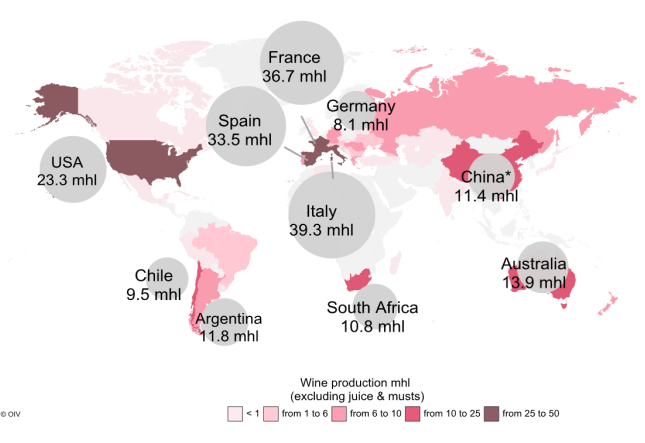 A historically low 2017 production especially in Western Europe due to unfavourable climate conditions.

An even higher level of production was recorded in the United States (23.3 mhl).

During the press conference held at the headquarters of the International Organisation of Vine and Wine, the Director General of the OIV, Jean-Marie Aurand, presented initial information about world wine production in 2017.

World wine production, excluding juice and musts, is likely to reach 246.7 mhl - an 8% drop compared with 2016 and one of the lowest levels for several decades. This drop is consecutive to climate hazards, which affected the main producing countries, particularly in Europe.

In the European Union (EU), extreme weather events - from frost to drought - significantly impacted 2017 wine production, which was historically low. Indeed, the forecasts of the three main producing countries saw a decrease compared with 2016 production.

The United States, with 23.3 mhl vinified (-1%12016), saw a high level of production for the second year running. One doubt remains: the estimated wine production is based on USDA forecasts for grape production, relating especially to wine grapes, from August 2017 and does not therefore take into account the potential consequences of the recent fires in California (October 2017).

In South America, wine production is likely to show quite an increase compared with 2016, despite the fairly low temperatures at the end of the 2016 year.

Brazil, after the previous year's very low production of 1.4 mhl, saw production levels of over 3.4 mhl in 2017.

In Chile, 2017 production registered a decline with 9.5 mhl, equating to -6% compared with an already low 2016 production.

In Oceania, 2017 Australian production reached a sustained level of 13.9 mhl, +6% compared with 2016. Production was on the up for the third year in a row. In New Zealand, production slightly declined in 2017 (-9%), yet this was in reference to a record production the year before. It nevertheless remained high (2.9 mhl).