Dtc Expands Further: You Have Booze

Alcohol delivery services aim to make ordering a six-pack as easy as as ordering a pizza. But what price do you pay for convenience?

On-demand beer delivery is the type of service every drinker, staring at an empty fridge, has wished for at one point. In an age of on-demand everything else-movies, grocery delivery, ride-sharing-alcohol is one of the final frontiers. But apps, websites and, naturally, Amazon have finally brought the dream of to-your-door-in-an-hour beer to life. What it means for the existing relationship between drinkers, retail stores and breweries, though, is still shaking out.

“The logistics are challenging and with alcohol you have some additional regulatory restraints,” says Keith Anderson, senior vice president of insights and marketing at Profitero, a leading global ecommerce analytics firm. “There’s a massive opportunity that you already see some services pursuing because, particularly in large-scale, high-density urban centers, there is a population of technology-enabled households that want and can afford to pay for convenience.”

Riffing on the models of meal-delivery apps like GrubHub and Postmates, the past few years have seen an explosion of on-demand alcohol-delivery apps and websites including Drizly, GoPuff, Minibar Delivery and many others. Most guarantee beer (or wine or spirits) in your hands less than an hour after you place your order. Even Amazon’s in on the game, with alcohol delivery available via PrimeNow in select cities-and who knows what the company’s recent $14.7 billion purchase of Whole Foods could mean for its beer offerings. People can currently summon some cold beers with a mere “Alexa, I need a six-pack” command to Amazon’s assistant device.

There are two ways this beer gets from the brewery to your lazy, thirsty self. The first and most prevalent model is that apps or services partner with existing retail liquor stores, who supply the beer and whose staff makes the deliveries. The app is just a go-between; MiniBar Delivery co-founder and co-CEO Lara Crystal calls it a “marketing technology platform.” A liquor store pays the app company to buy in to its online platform, essentially outsourcing its ecommerce to a third party. The second, less common model is dominated by Amazon. Amazon, unlike other services, actually owns its own warehouses and inventory; it also employs its own drivers to make deliveries. Currently, Amazon PrimeNow delivery of alcohol is only available in a handful of cities including Cincinnati, Columbus and Seattle.

Many such services are based in just a few cities so that the company can closely monitor logistics and work with multiple retail stores to offer a wide selection. Profitero’s Keith Anderson says that, like ride-sharing apps, supply and demand have to synch up for these services to work. Too many liquor stores and too few customers using the app means stores will lose interest in being on the platform; too many customers and not enough selection and drinkers will become frustrated with the lame options.

There are also logistical challenges. To prevent underage (but, of course, tech-savvy) kids from purchasing alcohol, store staff members or Amazon employees who make the delivery must check IDs before handing over the goods at the door. Furthermore, beer is not like printer cartridges or paper towels, which is why some beer-delivery customers have found that delivery services can come up short. When he was living in Sacramento, Jon Uhruh, a 35-year old services coordinator who now lives in Cheyenne, Wyoming, noticed that Amazon PrimeNow offered beer for delivery. He and his wife wanted to order something out of curiosity. They settled on one of their standbys, a six-pack of Lagunitas IPA.

“The beers arrived warm; they were very malty. I’ve had Lagunitas many times, they were no one near where the beer should be,” Uhruh says. “I reached out to Amazon and they did give us a credit to try again, and they promised it would be fresher and colder. The second time, it actually was an older dated bottle, over six months old, but it was colder. I knew it wasn’t what I know the brewery intended it to be, though. It’s going to be hard for Amazon to get the higher-quality craft brewers to sign onto this because a lot of the smaller guys are really worried about the quality of the product getting to the consumer.”

Search most of the on-demand alcohol delivery platforms, and you’ll find predominantly nationally distributed breweries and larger regional players, the kinds that you’d find in most corner stores. This isn’t to say there aren’t options that would pique a beer nerd’s fancy; Drizly in particular offers a database of beer searchable by style and country of origin that includes a notable number of locally made beers like Grimm, Transmitter and Ommegang in New York; and Half Acre, Pipeworks and Revolution in Illinois.

Because, except in the case of Amazon, local retailers enter their merchandise to the platform, beer selection (and freshness) should theoretically match what’s in that store’s coolers. Services like Drizly and Minibar Delivery might be best known for coordinating alcohol delivery, but they’re really just matchmakers bringing drinkers and stores together. They’re acting sort of like a Priceline for beer instead of hotels: Here’s what’s available in your area, here are the prices.

“Most important is the marketplace concept, that we’re pulling from as many retailers as we can in a market. You’re not constrained by the four walls of the store; you’re able to shop across stores, across prices, across inventory depth,” says Drizly co-founder Justin Robinson. “Look at any other industry: airline, restaurants, hotels. Alcohol is sort of the last frontier for that transparency, giving the power to the customer.”

On top of the retail price, the consumer will pay a nominal delivery fee, usually around $5 for the entire delivery, no matter its size. That’s not true of Amazon PrimeNow, though, whose membership-based service charges an annual cost, making deliveries free. Yes, someone just delivered that six-pack to you for the same price you’d pay at the store.

“In a store, a friendly staff member’s going to be able to say ‘Try this beer’ or ‘This is a new wine we found.’ We need to replicate that experience online.”

“In a store, a friendly staff member’s going to be able to say ‘Try this beer’ or ‘This is a new wine we found.’ We need to replicate that experience online,” says Robinson. “Some of the editorial is created in-house, but also we have retail partners with phenomenal wine or beer buyers and we leverage those relationships to get that content online. If you’re in Boston, you’re going to see a different piece from the local beer buyer than you might see in Phoenix. We want to work hand-in-hand so that their local expertise shows through.”

Are these delivery and online services a challenge to traditional liquor stores? Not necessarily, says David Christman, senior vice president of state affairs for the National Beer Wholesalers Association, which represents beer distributors. He is also the chief of staff for NBWA’s Beer Industry Electronic Commerce Coalition.

“Big picture, we like that [services] come into this not using the buzzword ‘disruptor’ but as an enhancer to the system that’s in place, working with locally licensed retailers,” he says. “It’s adding to consumer convenience but it’s not tipping over the apple cart in the meantime.”

But this relative harmony doesn’t mean there aren’t a few sticking points where online delivery and ecommerce services put traditional distributors or retailers on edge.

“If they’re not holding a retail license, but they are interfacing with the consumer, we’re pretty much of the belief that they should be subject to the same trade practice rules as a retailer,” Christman says. For example, a liquor store isn’t allowed to give certain alcohol brands more prominent shelf space or exclude that brand’s competitors in exchange for money; Christman says the same should apply to websites or apps. Theoretically, the liquor store could lose its liquor license, while there’s no such recourse for the website or app. “These laws are a big reason why we have so much variety in the beer aisle, so even if the aisle is a virtual one, the rules should not change.”

Christman says that a few years’ time will tell whether these services are a net gain for retailers, wholesales and breweries.

“Everybody wants to be online and be as convenient as possible. Structured right, there’s a lot of opportunity,” he says. “I’m anxious to see in a year or so if this is resulting in new beer sales.”

That’s the million-dollar question for breweries, retailers and for these delivery services: Is a customer more likely to buy more beer (or wine or spirits) because of an app or delivery website? If you’re the type of beer drinker who’s already hunting down the newest release at your favorite bottle shop or buying growlers from breweries directly, these services might not change the way you discover and buy beer. That is, of course, until you find yourself with an empty fridge and a car that’s at the mechanic’s shop. 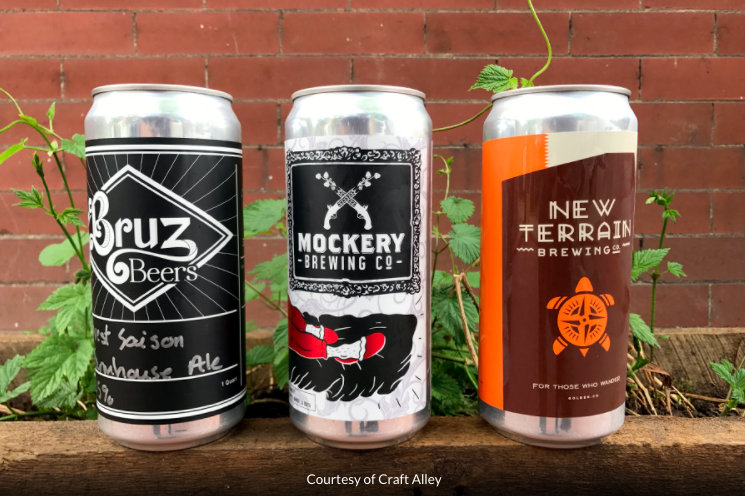 A few years ago, Bryce Forester was drinking with a friend at a brewery, remarking on how good fresh-from-the-tank beer tastes. He wondered if there was a way to legally deliver brewery-fresh crowlers to customers who don’t have time to visit the brewery. Turns out, it was legal, and he and his brother Bret built a business on the idea: Craft Alley. Craft Alley, less than a year old, also operates a small retail store in Denver, thus it carries a retail license. Customers can come in and purchase just-filled crowlers, or they can order as many as they’d like from different Denver-area breweries online. The customer selects a delivery time window, and Craft Alley staff delivers the crowlers for a $5 fee (it’s waived if the customer orders three or more crowlers). The business only works with small, self-distributing breweries who consider Craft Alley just another retail account. Forester estimates he orders about a barrel per week in crowlers from each brewery partner, and an Alley Pass program also offers crowler buyers discounts and incentives to actual visit the taprooms. “Convenience is a big part of it, and then we also do a lot of education for people that don’t necessarily know about the breweries. Not everybody has that beer friend who can guide them through everything. We do a lot of upgrading as far as people’s beer experiences, getting them out of some of the bigger national brands and get them into something local and fresh.”