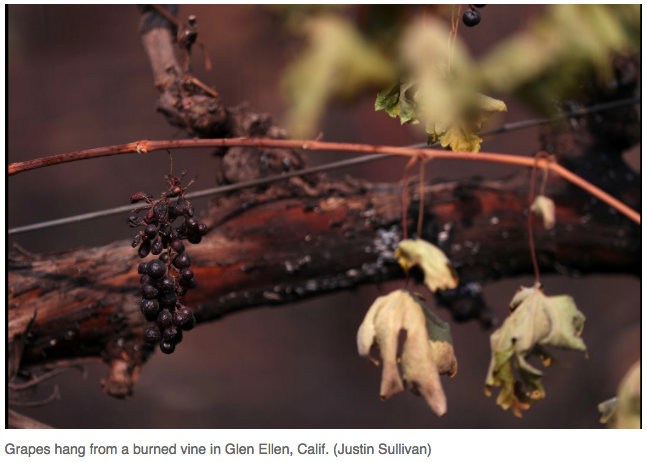 SANTA ROSA, Calif. — The wind known as the Diablo has picked up again, the air is dry, there is no rain in sight and the killer wildfires ravaging Northern California’s wine country remained almost completely uncontained Thursday morning. Officials warned that some of the big fires could merge, even as new blazes erupted, and thousands of people have been told to prepare to leave their homes — if they haven’t already.

Evacuations continue, including one order covering the entire city of Calistoga in Napa County.

In neighboring Sonoma County, where the menacing arc of flames has done the most damage, Geyserville residents were urged to leave Wednesday evening; two hours later, another evacuation order was issued in the Sonoma Valley.

At least 23 people have been killed by the fires in Sonoma, Napa, Mendocino and Yuba counties, where 3,500 homes and businesses had been burned at last count. Officials expect the death toll to rise — perhaps significantly — when officers begin going into the “hot zones” that were immolated in the firestorm.

“We can’t even get into most of the areas,” Sonoma County Sheriff Robert Giordano said. “When we start doing searches, I expect that number to go up.”

Amid these grim bulletins, the huge utility company PG&E acknowledged that the extreme winds late Sunday and early Monday had knocked trees into power lines in conditions conducive to wildfires.

“The historic wind event that swept across PG&E’s service area late Sunday and early Monday packed hurricane-strength winds in excess of 75 mph in some cases,” said Ari Vanrenen, a PG&E spokeswoman, in a statement released after the San Jose Mercury News first reported on a possible link between the wildfires and the power grid.

“These destructive winds, along with millions of trees weakened by years of drought and recent renewed vegetation growth from winter storms, all contributed to some trees, branches and debris impacting our electric lines across the North Bay,” she said.

Vanrenen said the company was up to date in the maintenance of its infrastructure and the surrounding vegetation but that excess rain last winter, followed by a drought, has created a lot of dry brush.

Officials with the California Department of Forestry and Fire Protection (Cal Fire) said they have yet to determine the cause of the fires.

Since Sunday, at least 22 separate wildfires have broken out across the region, burning more than 170,000 acres — a collective area larger than the city of Chicago. The conflagrations have led tens of thousands of people to flee their homes. About 4,400 are in shelters and will not be able to go home for many days, officials said.

In Sonoma County, 600 people were reported missing, though the sheriff’s office said Wednesday night that 315 have been located safe. Another 285 are still reported missing, but many may have lost cellphones or Internet access and may not have been able to reach friends or family.

Statewide, 8,000 firefighters are working to contain the fires, the worst of which are in Mendocino, Napa and Sonoma counties. In Sonoma County alone, more than a half-dozen separate wildfires have erupted, including one that started Wednesday.

The fires have put a strain on federal resources, too. Coming on the heels of catastrophic hurricanes, the California wildfires in total represent just one of 22 disasters that the Federal Emergency Management Agency is managing across the nation. Eighty-five percent of FEMA’s 9,900 full-time employees are working “in the field,” away from their assigned offices, agency spokesman Mike Cappannari said.

In some areas in wine country, the smoke and haze is so thick that the sun is a faint orange sphere in the sky. Most stores are sold out of air filtration masks. People pumping gas, shopping for groceries or walking dogs look like carpenters or surgeons, depending on which type of mask they were able to pick up.

Families crowd areas off the interstate highway, their cars packed with belongings. Highway 101 cuts through rolling hills that dominate the California coast, and entire hills are scarred black. In Santa Rosa, it is possible to trace the direction of the wind by which buildings were reduced to ashes and which remained untouched.

Pimlott, the Cal Fire chief, said a major fire in Napa County, known as the Atlas Fire, was 3 percent contained by Wednesday night. The same modest progress had been made against the Tubbs Fire, which invaded the city of Santa Rosa amid winds after midnight Monday morning and immolated entire neighborhoods.

[The air quality in California is atrocious, and it’s going to stay that way for days]

In Santa Rosa on Wednesday, Ameir Kazemi stared at the smoldering remains of his business, the Mohawk Sign Company. It has been a Santa Rosa institution for 50 years, and Kazemi, 33, has owned it for a decade. Now, it’s a pile of ashes and charred wood.

On Monday at 3:45 a.m., Kazemi’s friends began calling him at home, warning him that a wildfire had jumped the highway. He wanted to dash to the store, but he couldn’t leave his pregnant wife. Two hours later, a local TV station broadcast video of his building on fire. The station replayed the clip constantly.

“It was pretty sickening,” he said. “I just wanted to come see if there was any chance that anything survived — the artwork, 10 years’ worth of stuff on my hard drive. It’s all gone.”

Jennifer Pierre returned to her Santa Rosa neighborhood to see what was left of her house: almost nothing. Everything was ashes, including her children’s baby blankets that she used to spray with her perfume, her wedding dress and her wedding ring. Even the valuables in their fireproof safe had burned or melted.

She and her husband had escaped with the clothes on their backs, and the couple now smelled like the smoky remains of their home.

“I could not wash that smell off me,” she said. “You just want to scrub it out of you and get the smell out of you. Every time you breathe, this whole ordeal immediately comes back to you.”

Christina Hanson, 27, who has spina bifida, a neural tube defect, and uses a wheelchair, was one of the people reported missing. Late Tuesday, her family posted the news that she did not survive the fire that struck her home on the north side of Santa Rosa.

Frank Vinculado, Hanson’s cousin by marriage, had used social media to alert the community that she hadn’t been accounted for in the wake of the fires. “Help me and my wife find her cousin!! We have lost contact with her in the Santa Rosa fires!” he wrote.

But late Tuesday, after a fire inspector reportedly visited the home, Vinculado wrote on Twitter, “To all who have retweeted, searched, called, text we have gotten news we have lost an angel.”

Sonoma County Sheriff’s spokeswoman Misti Harris said sometimes the only way to spread crucial information is with boots on the ground. “Deputies were running toward the fire, banging on doors, getting people out of their houses,” she said.

Giordano, the Sonoma sheriff, said the mandatory evacuation zones in the county remain off-limits 24 hours a day, and he doubted that residents would be able to return to their homes this week.

Reporters asked Giordano about anecdotal accounts from residents saying they hadn’t gotten alerts by phone about the oncoming fires. The sheriff cited a technological change in society that has undermined one automated system using landlines.

“People don’t have landlines anymore,” he said. He urged citizens to sign up for an alert system that sends messages to their cellphones.

With some of the fires in the Sierras and Southern California nearing containment, Cal Fire is shifting resources — which include 73 helicopters and 30 air tankers — to the most dangerous fires in and around wine country. The U.S. Forest Service said it has dispatched 740 personnel.

“We are in a wickedly dangerous fire situation and when one of us needs help, all of us come,” said Bob Baird, director of fire and aviation management for the Forest Service’s Pacific Southwest region.

Many Forest Service personnel are dealing with threats to their own homes. On Wednesday morning, as Baird was coordinating firefighting efforts, he received a text from his wife telling him that they were being asked to evacuate their home in Fairfield.

“The Atlas fire is three miles from the [Fairfield] city limits. The fire is about five miles away. Normally, that would be far away, but not with this fire,” he said.

“We’re literally looking at explosive vegetation,” said Pimlott, the Cal Fire chief. “These fires are burning actively during the day and at night.”

Phillips and Achenbach reported from Washington. Lea Donosky, Alissa Greenberg and Breena Kerr in Santa Rosa, and Abigail Hauslohner and Kimberly Kindy in Washington contributed to this report, which has been updated.