Why Do People Want Veggie Burgers That Bleed? 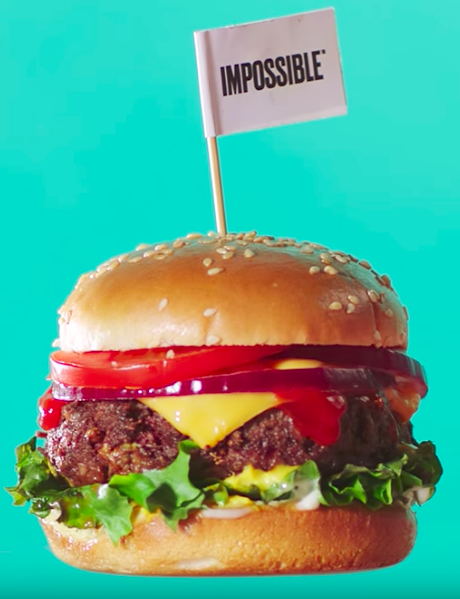 Meat alternatives aren’t new — after all, vegetarianism has its roots in ancient Greece — but the newest crop of products meant to replace animal protein is more high-tech than hippie. The modern meat-free burger or steak gets its flavor from scientists in lab coats, rather than Birkenstock-wearing cooks thoughtfully forming patties from beans, quinoa, and carrots.

Protein is one of the few food groups that rarely gets a bad rap. Unlike carbs and sugar, which have been under attack for some time now, protein is a necessary nutrient; it's associated with energy, muscle, weight management, and satiety. America’s love of protein hasn’t changed much over the years: A 2015 survey conducted by the International Food Information Council found that ninety percent of respondents "strongly or somewhat agreed that it is important to get enough protein in their diet."

Despite health warnings from the American Heart Association and World Health Organization and studies that show livestock production has a negative impact on the environment, red meat consumption is on the rise.

But where that protein comes from is changing. According to a February 2016 report by Packaged Facts, consumer notions of what constitutes a good protein source are expanding to include a wider variety of plant-based protein ingredients.

A slew of modern meat alternatives are trying to capitalize on this by creating juicy (even "bloody") burgers, chicken strips, and steaks that are meant to appeal to carnivores as well as vegans and vegetarians. This new class of veggie burgers is informed by technology just as much as it is by nutrition and sustainability, and incorporates lab-grown meat as well as high-tech vegetable mashes.

This week, lab-grown chicken and ground beef purveyors Memphis Meats announced it had raised an additional $17 million in funding from private investors including Microsoft co-founder Bill Gates and Virgin CEO Richard Branson. Gates also backed the bleeding veggie burger from Impossible Foods in a round of funding worth $75 million. Back in March, Impossible Foods announced it would be opening a massive new production facility in Oakland, California, and planned to put its burgers on menus at 1,000 restaurants across the country by the end of 2017. But will demand for alternative veggie burgers keep up with the supply? 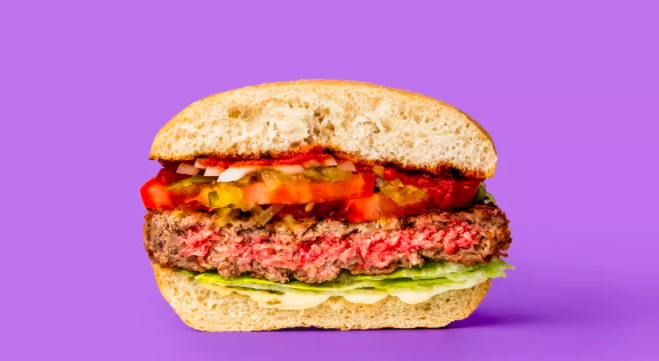 Why do people want meat alternatives?
The growing interest in alternative proteins can be largely attributed to a few factors: health, the environment, and animal welfare. A spokesperson at Impossible Foods, the maker of a forthcoming burger made from lab-derived meat (more on Impossible Foods below), says the company's aim is to "make delicious meat and dairy products from plants and thereby reduce the impact of industrial animal farming."

Proponents of fake meat products say raising livestock is an inefficient use of land and water. Going vegetarian, therefore, is not only better for the human body (the World Health Organization classifies some meat products as carcinogenic), but they claim it’s better for the environment, too.

According to the Environmental Working Group, a nationwide vegetarian diet would be the equivalent of taking 46 million cars off the road, or not driving 555 billion miles. Still, it would only make a moderate dent in carbon emissions — about a 4.5 percent reduction overall.

Why is tech getting involved?

MOSA MEAT
Founded: 2015
Key investors: Sergey Brin
About: The company's mission is to create marketable, lab-grown meat — i.e. beef with no butcher. Founder Mark Post has already grown a hamburger from bovine stem cells (to the tune of $325,000) but has said the company will sell lab-grown beef in four to five years.

The technology sector has taken this mission and transformed it from a personal diet or animal welfare cause into a global humanitarian issue. The attention from tech firms and venture capitalists has had an exciting effect on what was once a crunchy granola industry. Whether the burger is culled from plant matter or stem cells, technological resources, labs, and scientists are fueling this revival.

But why? According to a few venture capitalists, it’s because consumers are demanding it. "If you look at the millennial customers, they’re not really just satisfied to have a meal, they want to have a meal that they feel good about, that the sourcing of those ingredients is aligned with their values — what’s the carbon footprint? Where did it come from?" says venture capitalist Tony Conrad.

"Everyone is taking note. It might be a small segment [of tech companies investing in plant-based proteins] today," says Conrad, "but it’s a growing segment for tomorrow."

What is lab-grown meat?
Lab-grown meat is also known as cultured meat (sometimes even "in vitro" meat), meaning it’s derived from animal cells.

Mosa Meat specializes in lab burgers made from stem cells. Its $330,000 prototype (bankrolled by Google co-founder Sergey Brin) was taste-tested live in 2013 and the company has plans to offer the meat for sale by 2020, reports the BBC.

Memphis Meats is another company growing "real meat" in small quantities using cells from cows, pigs, and chickens. "Our products are not mock meats or plant-based meats," says Memphis Meats co-founder Uma Valeti. "They are real meat, grown from animal cells, without the actual animals. We recognize that people love meat because it’s delicious and affordable. Our goal is to make real meat that is better tasting and more affordable, but also safer and more sustainable."

Valeti says that lab-grown meats don’t come with some of the downsides of traditional meat — by abstracting the animal from the process, Memphis Meats has "eliminated any chance of fecal contamination and other health risks." He adds that the product is also more energy-efficient, as it doesn’t require the energy used to maintain a slaughterhouse: animal slaughter, of course, isn’t necessary to create this meat.

The company’s first products — hot dogs, sausages, burgers, and meatballs — are now in development, and founders expect to have items to market in less than five years. Memphis fried its first-ever lab-grown meatball in 2016 — a rather pricey endeavor, considering it costs around $18,000 to produce a pound of the stuff.

Modern Meadow, meanwhile, specializes in bio-fabricated leather — growing collagen (a protein found in skin) to create "hides." The company hopes to do the same thing with meat eventually, though the timeline is unclear; for now, founders say they are focused on leather.

How are newer veggie burgers different from those of past decades?
The newest crop of veggie burgers (those not made from stem cells) are pretty high-tech; thanks to technological innovations, they’re able to mimic the real thing a bit better than the meat alternatives of yesteryear.

Beyond Meat is one of the more well-known players in the plant-based protein game, largely because its products already line shelves across the country. (None of the lab-grown meat companies have products for sale yet.) 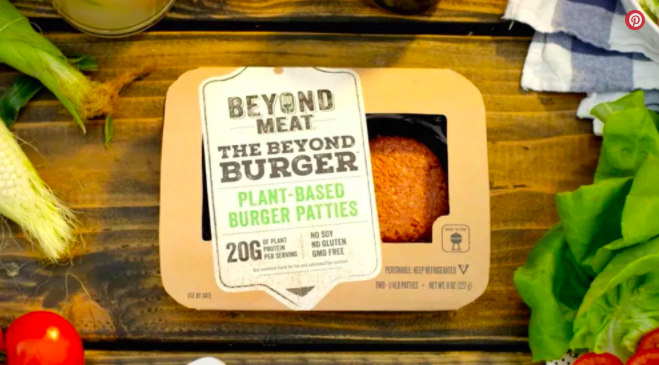 The company’s Beyond Burger even bleeds like real meat (though in this case the red substance is actually beet juice). The Beyond Burger is entirely plant-based, but is sold in the meat section of the grocery store — a marketing ploy to get carnivores to try it, too. The primary source of protein in the burger comes from peas. According to Beyond Meat’s website, the burger was created after seven years of experimentation, not by "inventing new materials but by matching the plant equivalent and assembling it in the architecture of meat."

Impossible Foods makes 100-percent plant-based foods — albeit ones that look and, supposedly, taste, like the real thing. The company has raised over $250 million in equity so far (backers include Bill Gates) and will soon unveil its first product, the Impossible Burger. The burger is made entirely of amino acids, fats, and nutrients from plants. And it bleeds, too — but not real blood or even beet juice: Rather, the company synthesized cow blood using heme, a molecule found in hemoglobin and in some plants. Impossible Foods recently came under fire because though the FDA has approved the product for consumption, the regulatory agency has some reservations about heme.

The burger is now available at dozens of restaurants in San Francisco, New York, Texas, and Los Angeles, including chef David Chang’s Momofuku Nishi and Umami burger, a chain based in Southern California. According to a spokesperson, the product will make its way to grocery outlets "at some point," once the company expands its production capacity. "Our first food is called the Impossible Burger and it’s made for true meat-lovers," says a company spokesperson. "It starts out raw and looks, cooks, smells, sizzles, and tastes like animal-derived ground beef."


A spokesperson also says Impossible Foods’ technological approach will eventually allow it to produce plant-based versions of virtually any meat — beef, pork, chicken, or fish — as well as cheese, yogurt, milk, and cream.

How do these newer burgers taste?
The first lab-grown hamburger got high marks for its "mouth feel," though one tester noted that the lack of fat was noticeable. Another said the flavor was akin to "an animal protein cake."

In an interview with Bloomberg, food writer Mark Bittman called the Impossible Burger "very impressive"; of Beyond Meat’s products, he said they will "fool you."

Bittman did point out, however, that products made out of "powders" and other ingredients are really just "processed food" by another name. "Let’s remind people that there is real food that’s grown from the ground, and real animals that are fed real food. And if we treat them right, and we eat fewer of them, we can — not to mix metaphors — have our cake and eat it, too."

Editor's note: This story was originally published on July 26, 2016. It has been updated throughout to reflect the latest information.

A Timeline of Modern Burger Alternatives 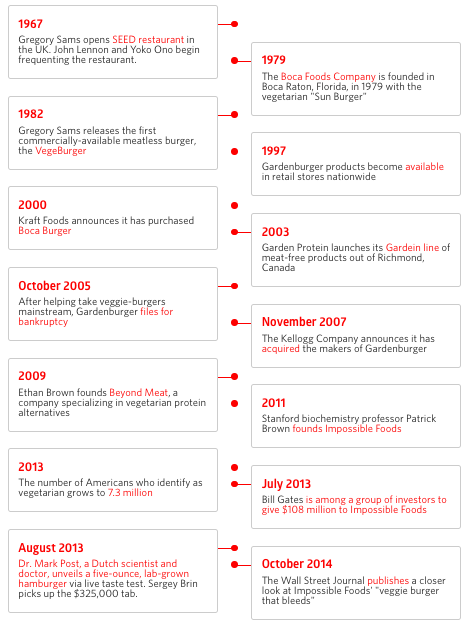 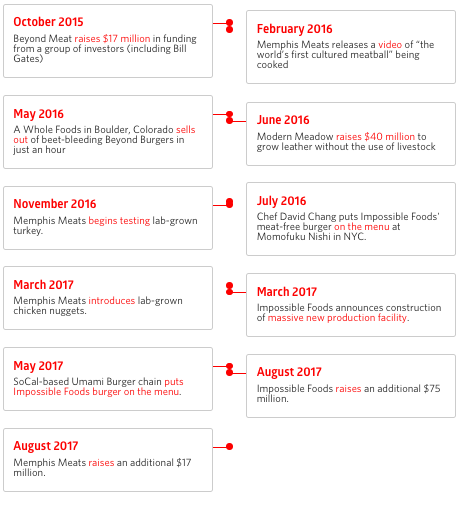