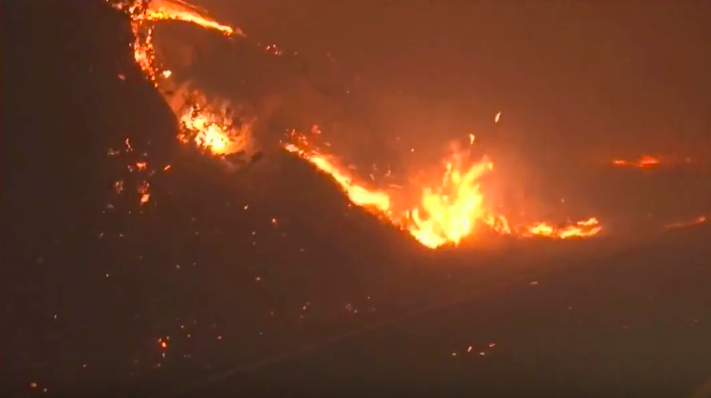 Several massive wildfires were burning out of control in Napa and Sonoma counties early Monday morning, forcing the evacuation of neighborhoods and at least one Wine Country resort and the shutdown of major roadways as firefighters sought to halt the advance of infernos driven by powerful winds.

There was no immediate information on damage and injuries, but structures were burning in both counties, according to authorities and witnesses.

The series of fires began to ignite late Sunday and multiplied as the night went on, impacting four counties. In Mendocino County, authorities evacuated communities near Redwood Valley and Willits. And in Marin County, officials said a grass fire had necessitated the closure of Highway 37 between Highway 121 and Lakeville Highway.

All over the region, flames raced across fields and freeways and skies filled with embers and ash. The National Weather Service said the blazes, which caused power outages and blanketed much of the Bay Area in smoke, were fanned by strong and dry northeast winds.

Firefighters work to save structures on Soda Canyon Road in Napa, Calif., on Monday, Oct. 9, 2017.
Cal Fire, the state agency, said the Atlas Fire in Napa County was near Atlas Peak Road and had blackened at least 200 acres northeast of the city of Napa and the Silverado Trail. A second Napa County blaze to the northwest, near Calistoga, forced evacuations as well.

Evacuation centers were set up at the Napa County Fairgrounds at 1435 North Oak St. in Calistoga and CrossWalk Community Church at 2590 First St. in Napa.

In Santa Rosa, evacuations were ordered for residents and businesses in the Skyfarm, Fountaingrove Parkway and Montecito Heights areas, according to the Police Department. Evacuees were directed to the Finley Community Center on West College Avenue and Stony Point Road.

The Sonoma County Sheriff’s Office sent a message to the community saying, “If you live near Cardinal Newman High School or Larkfield, it is time to evacuate.”

Just after 2 a.m., Santa Rosa police reported a fire had jumped Highway 101 on the north side of the city and “ignited structures” west of the freeway near a Kohl’s department store on Hopper Avenue. Evacuations were then ordered for that area.

“This is a life threatening event,” officials said. “Leave immediately.”

In Napa County, guests of the Silverado Resort and Spa on Atlas Peak Road said they had been evacuated in a rush as flames approached. The resort had hosted the Safeway Open, a PGA Tour event, which ended Sunday.

“We were sleeping, but we kept smelling smoke,” said Chris Thomas, 42, of Kirkland, Wash., who arrived in the Napa Valley late Sunday with his wife, Marissa Schneider, for a wine-tasting trip.

They saw a firetruck pass, then were ordered to leave by loudspeaker. The power went out. Then things went downhill fast.

“It was surreal,” Thomas said. “When I started loading stuff into the car it was a hell-storm of smoke and ash. There were 30 to 40 mph winds. I couldn’t even breathe, so I ran back to the unit to get Marissa. It was so smoky I went to the wrong unit.

“When I found her I said, ‘Forget it, let’s just go.’ It went from being an annoying evacuation to something really scary.”

Schneider said, “Debris was gusting around. The flames were about 100 feet from our door. It was scary.”

They drove to downtown Napa and found a hotel room, though they were wary of being evacuated again.

On Highway 121 between Sonoma and Napa, flames chewed up vegetation on both sides of the road, shooting embers as a stream of people fled the area. Some drivers pulled over to the side of the road at safe spots, looking back at the fires. Police and firefighters tried to keep people moving.

In Sonoma County, authorities were responding to multiple wind-driven fires.

The Sonoma County Sheriff’s Office said fires had broken out at Mark West Springs and Riebli roads in Santa Rosa, at Shiloh and Conde roads in Windsor and at Highway 116 and Fredericks Road in Sebastopol.

“The strong winds are making these fires difficult,” the Sheriff’s Office said.

The Petaluma Community Center at 320 North McDowell Blvd. was opened to evacuees as well.

Authorities in Marin and San Francisco counties made the same plea, asking residents who smell smoke not to call 911 unless they see flames.