A Vintage Era For English Vineyards 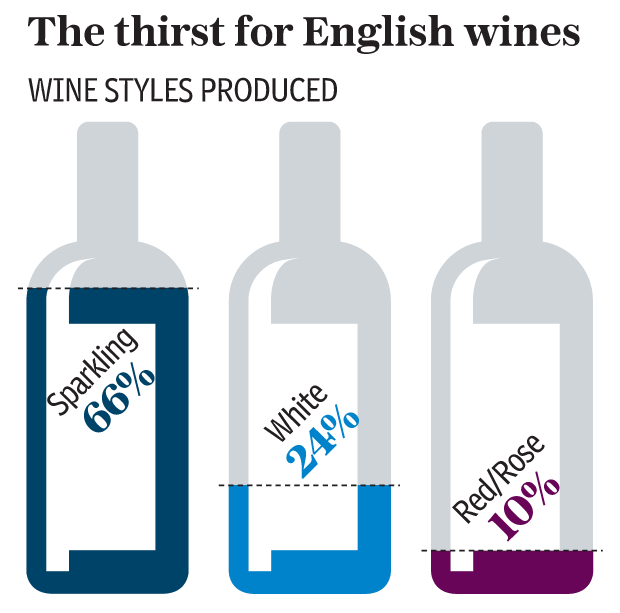 On a misty morning in Ditchling, West Sussex, Mardi Roberts stoops to gently snap off a handful of vine leaves hiding the full glory of a bunch of plump grapes just two weeks away from being harvested on her family’s vineyard estate.

The idyllic rolling South Downs backdrop is suddenly shattered by a loud bang – “We let bangers off to scare away the birds,” the softly-spoken Australian-born director at Ridgeview Estates cheerfully explains.

Deafeningly loud cracks have become second nature to Roberts and the rest of her winemaking family – husband Simon, sister-in-law Tamara and mother-in-law Christine – since they began their brave quest more than a decade ago to make premium sparkling wine in England.

The hard work is bearing fruit.

However, Ridgeview isn’t alone in enjoying the soaring popularity of English wine.

Vineyards used to be a common sight in England. There were 46 recorded in the 11th century but, by the end of the First World War, all of them had disappeared.

In the late Sixties and early Seventies, farmers turned over some of their land to grapes, but the popular Germanic hybrid grape varieties meant that English wines were far from being internationally acclaimed.

There was so much snobbery around English wine that when Ridgeview started producing wine around the millennium, the vineyard didn’t put “England” on the bottle, fearing negative associations.

Waitrose was among the early backers of domestic vineyards and now commands 70pc of the retail English wine market, selling local varieties in nearby shops. In 2009, the grocer put its money where its mouth was by buying a plot of land at Leckford in Hampshire and planting its own vines.

Leckford
Waitrose's Leckford Estate. The vineyard is lit by candles during cold spring nights to protect the vines from frost
“No doubt about it, English wines were a bit of a joke 20 years ago,” Pierpaolo Petrassi, Waitrose’s master of wine said. “But the production has been consistently better, which has transformed the quality, and English wine is competing on a global scale now.”

Many credit the transformation of the English wine industry to the shift from German to French grapes, as the acidity of the chalky soil, found near the South Downs and in Hampshire, is the same as France’s Champagne region, near Epernay. Vineyard applications have risen over the last decade from 1,879 to 4,500 last year, with the majority in West Sussex and Hampshire.

The South Downs and hills of Hampshire now have a proliferation of vineyards because the most complex grapes, which are thought to produce superior wine, grow on vines that must struggle for water and nutrients.

Mardi Roberts of Ridgeview says the popularity of English wines has soared
Nyetimber, near Horsham in West Sussex, is widely considered to be a trailblazer. It was the first English wine estate to concentrate on the champagne grapes Pinot and Chardonnay and to import winemaking expertise from Champagne.

Ian Kellett, a former food analyst at Kleinwort Benson, bought England’s oldest commercial vineyard – Hambledon in Hampshire – in 1999 and ripped out the existing vines, replanting them with Chardonnay, Pinot Noir and Pinot Meunier.

England’s cool climate is considered to be on the margins of viticulture capability, but according to government figures, the average temperature in the UK is one degree higher than it was 100 years ago, which is also helping production.

“For good fizz you need an awful climate – welcome to England,” Kellett laughs.

Still, Kellett insists that English winemaking isn’t “a climate change play. There are derivatives on the London stock market one could buy for that.”

Sparkling wine continues to be the most popular, with 66pc of English vineyards focused on fizz. The reason, Petrassi says, is that red wines tend to require warmer climates to ensure the grapes are ripened fully.

However, Bolney Estate in West Sussex, started in 1972 by Rodney Pratt, a former City trader, is one of few brave enough to do so. Its Lychgate Red won the UK Wine Producer of the year at the prestigious International Wine and Spirits Competition in 2012.

The rise in production of English wine has seen record vintages in the past two years, with 5m bottles produced, and forecasts of a jump to 10m by 2020. Wine exports are expected to increase from £3.2m last year to more than £30m by 2020.

As the industry has evolved and supply has increased, England has basked in its own winemaking boom. Where it might have once been unthinkable for English wine to be served instead of champagne, Nyetimber’s £40 bottle of sparkling wine was not only recently mistaken for a £65 French rival but unanimously preferred by blind tasters in Paris.

Chef Gordon Ramsay went one step further last year by putting English wines on the menu of his new restaurant in Bordeaux – the heart of the French wine world.

As a result of the rising reputation of English wines, two major champagne houses, Tattinger and Pommery, have also both snapped up vineyards in Kent and Hampshire and are planning to begin production within the next few years.

“We’ve gone from tokenism to being seriously considered by the wine world,” says Roberts.

However, progress hasn’t come without a struggle.

“It’s expensive to produce wine, the land is expensive and there are increasing labour and machine costs,” says Roberts.

Land agents estimate that arable sites which have the right geology and climate for vines command a 30pc premium to other farm land. Meanwhile, the English wine industry is concerned about the threat of increased labour costs and any post-Brexit clampdown on work visas, as the majority of vineyards use pickers from Eastern Europe.

The costs of growth and the lure of future expansion is prompting vineyards to explore innovative financing.

Most famously, Chapel Down in Kent has used crowdfunding to support its growth while Hambledon last year launched a £3m mini-bond, followed by Gusborne Estate which is 64pc owned by Conservative billionaire Lord Ashcroft.

Kellett ambitiously reckons that in 15 years sales of English wine will have overtaken champagne in the UK; a goal that will no doubt be celebrated with more than one glass of English fizz.