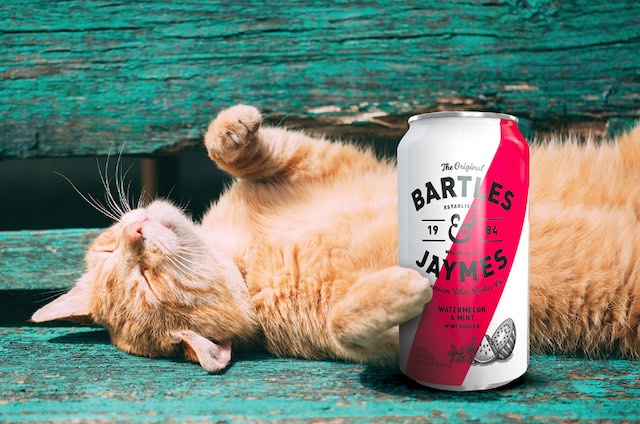 The king of wine coolers is back with new cans and new flavors.

Aweird flex: Back in the spring I was asked to speak to a class at Yale University about cheesy drinking trends of the 1980s, a topic I’ve inexplicably become an expert on. When I casually brought up Bartles & Jaymes, the Ivy-educated Generation Zs stared at me in stone-cold silence. They had absolutely no recognition of those once-A-list surnames.

It was all the way back in 1981 when E. & J. Gallo, one of the country’s largest wineries, introduced this brand of what were known as wine coolers. Before then, wine coolers had mostly been homemade concoctions—cheap white wine combined with 7Up and maybe some fruit (yes, okay, essentially sangria). But E. & J. Gallo’s commercial offerings were packaged in sleek 12-ounce bottles, sold in six-packs, and came in underage-drinker-friendly flavors such as peach and black cherry.

They were a sensation by the mid-1980s, bolstered by folksy television commercials that introduced the nation to Frank Bartles and Ed Jaymes, two porch-dwelling old-timers who were actually nothing more than fictional characters portrayed by actors, designed to sell a product to consumers a half-century younger than them. By the time the two geezers appeared in a Super Bowl XXII commercial in 1988, Bartles and Jaymes (the characters) were as big of ’80s advertising icons as Spuds Mackenzie and the California Raisins.

And then, the brand and the two men just kinda vanished.

What happened was that on January 1, 1991, Congress gave drinkers the most brutal hangover ever to start a new year: The nation’s excise tax on wine was raised from $0.17 per gallon to a whopping $1.07. It suddenly became a quite expensive proposition to blend cheap wine with nuclear-red strawberry flavoring.

The clever way around that tax? Eliminate the wine. That, in turn, spawned the rise of malt-based beverages—“alcopops,” if you will—like Zima, Smirnoff Ice, and Mike’s Hard Lemonade that tasted like the wine coolers people had spent the ’80s falling in love with, but were taxed like beer. They were big hits on the fake ID circuit and spelled the end of wine coolers.

You would have thought Bartles & Jaymes then ceased to exist, as I did. Au contraire. Instead, quietly, it too quickly transitioned to being a wine-free “malternative” beverage in late 1991.

Nevertheless, I somehow went through my prime trashy drinking years—from high school and college in the late-'90s onto my dumb-young-adult years of the early aughts—without ever encountering a Bartles & Jaymes bottle at a bar or party. The commercials certainly weren’t on the air anymore, nor could they be; the actors would die in 1996 (Bartles) and 2015 (Jaymes).

Bartles & Jaymes was quietly biding its time, poised for a comeback.

Alas, little did I know, Bartles & Jaymes had been chugging along the whole time, never once not appearing on shelves. Yes, the brand wasn't doing as well as in its heyday, like in 1986 and 1987, when E. & J. Gallo sold around 120 million gallons of wine coolers each year. But, even if wine cooler sales had declined significantly over the two decades, as recently as 2007, Bartles & Jaymes was still moving a good 30 million gallons per year. In a way, it was quietly biding its time, poised for a comeback.

“We started having discussions about what the reinvention of Bartles & Jaymes [looked like] and kicked off product development about two years ago,” says Stephanie Gallo, E. & J. Gallo’s chief marketing officer.

If Bartles & Jaymes had managed to improbably survive America’s craft beer revolution, the bourbon explosion, and $15 cocktail mania, it had finally made it to what E. & J. Gallo saw as another wine cooler-friendly era. As you may have heard, hard seltzer is the hottest thing in the goddamned world. What if E. & J. Gallo could go back to using wine...and then slip this wine cooler onto millennial and sub-millennial refrigerator shelves alongside White Claw and Bon & Viv?

In May of this year, for the first time in nearly three decades, the company started again paying that $1.07 excise tax to put the “wine back in wine coolers” (Gallo’s words) with the relaunch of its brand. Bartles & Jaymes is now canned, of course, because every alcoholic beverage must be canned these days (in pleasant white cans if possible). The cans have a scant 4% ABV and, again like hard seltzer, they're low-sugar and low-cal; just 120 calories, far less than they were in the 1980s. Most significantly, these newfangled wine coolers come in flavors that sounds suspiciously close to those offered by hard seltzer brands—Ginger & Lemon, Cucumber & Lime, Grapefruit & Green Tea, and Watermelon & Mint.