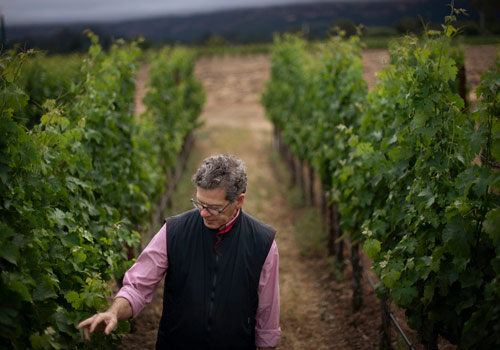 Owner/winemaker of his eponymous winery, Paul Hobbs's exposure to farming started as a child where in upstate New York his father presciently had young Paul taste apples of the same variety grown in orchards miles apart from one another. He cut his teeth working at Robert Mondavi Winery earning kudos for his development of its barrel program, but his greatest impact in the wine world has been as one of two innovative winemakers to influence the development of what is now a wine category unto itself, Argentine Malbec. I first met Hobbs when working as a sommelier in California; listing his Russian River Chardonnay and Pinot Noir, he accepted my invitation to showcase these and others of his wines at a dinner for my customers. His work is as far­flung as Armenia and Uruguay, and he's harkening to his New York roots by developing a Finger Lakes Riesling project with noted Mosel vintner Johannes Selbach. 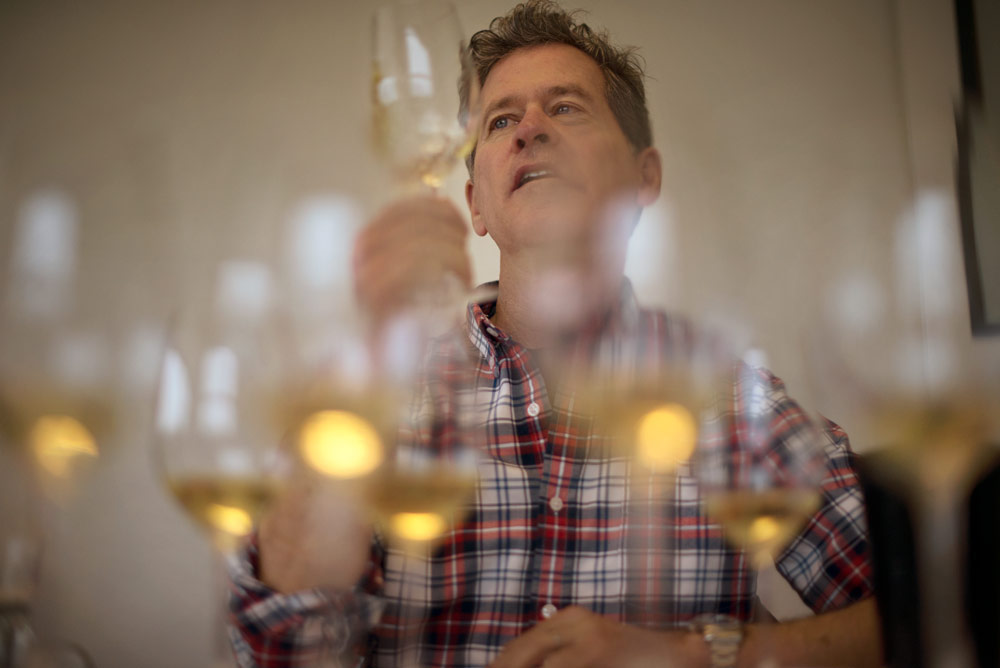 You are known primarily for your work making Pinot Noir and Chardonnay from Sonoma, Cabernet Sauvignon in Napa, equally in Argentina for Malbec. What are the greatest difficulties and rewards in each of these?
It's been a significant challenge starting in Napa then coming to Sonoma. At Simi where we had Chalk Hill fruit, we hadn't the success as I had in Napa with Mondavi. I wanted Hobbs to be a Cab house as well as Pinot Noir and Chardonnay, yet we're not based in Napa Valley; I don't think anyone else fits that. It was a daring decision I made at the time in being accepted, but vineyard trumps a winery's location which has been proven by the marketplace. Many people think we ought to market through Napa Valley and as of Dec. 2012 with the Nathan Coombs vineyard we own a property there so we'll soon be a member of the Napa Valley Vintners Association.

There's not a lot of difficulties in working with Pinot Noir and Chardonnay here in Sonoma - ­­we don't have rainfall falling inappropriately. But heat spikes can be a challenge. Not enough heat, like in 2011, is a rare occurrence...in my 35 years I can't recall another year with that. People would talk about flavors but ignore seed ripeness. What you taste in a berry hasn't a direct correlation between what you'll see in a wine. There are keys other than flavor telling me when to pick. There's been a lot of talk of 'farming for flavors'. I rarely use a refractometer, it's really spending time walking the vineyards during the growing season and watching how the fruit's growing. When Michel Rolland first came to Simi winery to consult I was chewing on seeds, something he thought a peculiar thing to do. In Bordeaux they were more concerned with getting sugar ripeness as they'd find phenolic ripeness easy to achieve.

Interestingly Malbec's challenges aren't dissimilar to those faced with Cabernet Sauvignon. Heat was always an issue in Mendoza, defending against hailstorms, over-reliance on flood irrigation, so achieving greater balance is a question of innovation. High winds and a high incidence of frost can be a problem, though when closer to the mountains the incidence of hail diminishes. Malbec's main flaw is its spring set, more so in Cahors or Bordeaux than in Mendoza. It's fickle in that regard, but it's very resistant to heat and autumn rains, far more than Cabernet Sauvignon. In 2013 Argentine Malbec came in with flying colors whereas Cabernet Sauvignon crashed & burned. When early on we recognized that it could make big & powerful wines, the question then was to learn how to tame it as a more refined product.

With the moving uphill of vineyards changing expectations for Argentine Malbec, what might the next step for it be?
We're going to see Malbec becoming far more sophisticated than it is today. The parameters behind it have been rudimentary. Malbec is already, in modern times anyway, made into wines that can be considered amongst the finest in the world, a 'noble variety' concept. Until 20 years ago nobody had any idea that it could be a great wine at all. Some of the vineyards we're now planting will become mature which will bring another refining phase including that of clonal selections and more site specificity. Serious work is growing, and not only in getting big headlines. 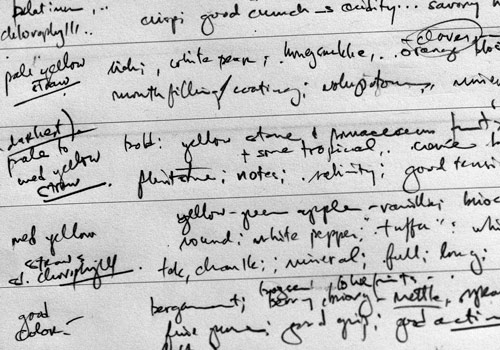 What are the differences in consulting to a wine's development versus that of shepherding it as your own from top to bottom?
I don't see a big difference. I throw myself into anything I do. I make enough visits that I stay with a wine. The biggest difference is that consulting allows you to see many regions and approaches that would be virtually impossible any other way. The spectrum of what you can view through consulting is broader, giving you more experiences and limiting factors to work with. I'm consulting in Ontario, and what few people know of Malbec is that it has poor cold tolerance as does Syrah. It gives you points of reference that you wouldn't have in staying with only one vineyard. I think it helps show you things in a different light.

How did Cobos come about?
There came a point that I wanted to develop my own wines in Argentina. I'd worked with Nicolas Catena first, the other members came later, and it came to a point where our work matured, so we decided that would be the right thing to do. I decided in 1997 that I'd find partners for a venture. A couple who'd worked with me at Kunde Winery knew I was interested in doing a partner-­generated project in Argentina based upon the Opus One premise. My goal was to make a higher label product from the upper Mendoza river zone. We started with $70k in capital and bought exclusively from others, now we've 52ha of vineyard owned by my partner's father along with 3.5ha of our own Cab.

You've recently added a couple of more unusual countries and regions to your roster of consultancies. Why Armenia, Uruguay, and Cahors?
They're not all the same kind of thing. Armenia and Cahors are both partnership projects while Uruguay is strictly as a consultant to one property of the Deicas family. I'm fascinated with Tannat having worked in Uruguay in the early '90s. I was invited by the Deicas family to consult on things I'd advised on 20 years ago finding sites we hadn't known about then. They've done their homework since and grown to the point that there's critical mass of having something reasonable to work with. Cahors is where Malbec started but what makes it interesting is Cahors's fascinating and diverse geology. It's so not Argentina, there are few parallels between the two, and an opportunity to see a very different expression of Malbec in a place figuratively caught in medieval times. I always like going to regions where something needs to be done. Armenia is amongst the world's oldest wine regions with cultural challenges to surmount; it's going to be the hardest and most remote place I've ever worked.

What are the key ways in which a sommelier might distinguish differences between Chardonnays hailing from different Sonoma appellations?
There are definitely differences between the 19 appellations in Sonoma County, and I'm only up on Sonoma Mountain and Russian River which are very distinctive from one another. The mountain is a very tiny appellation whereas the river is a relative behemoth of which I'd exclude 70% of it­­ - everything east of Hwy. 101. The mountain's heavier soils tend to give more minerality, earthiness, weightiness in the mouth as if were a red wine for white wine drinkers; the river gives a more agile mouthfeel and bright apple character with some citrus as well as a tendency for fuller body...though on a more delicate frame.

How do you view working with Johannes Selbach in an area neither of you have previously worked, New York's Seneca Lake? It's sort of a midpoint for the two of you.
I gave considerable thought into partnering at all. When I came to the conclusion that someone with the credentials and history and the already established relationship we had, I knew that we'd learn from each other. It's more challenging than either of us had contemplated. I'd investigated Seneca Lake for two years and was on the verge of closing on the site when I first contacted Johannes of it. I knew I had something worthy and unique for the region. We're on a very steep slope planting up & down, east/west along the slope and parallel to the fall line whereas others plant on sandier soils north/south parallel to the lake and perpendicular to the fall line. At a 450 ft. rise from one end to the other of the property, a 30% grade slope on average, it's been expensive to develop. We've already started planting what will become 35 acres of Riesling.