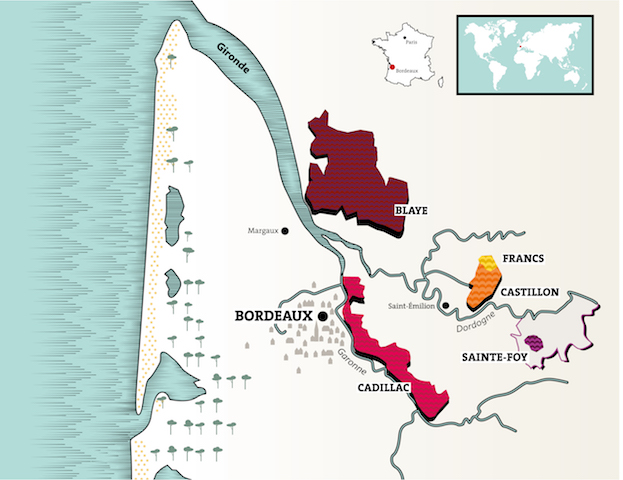 Everybody loves the wines of Bordeaux. Everybody also says that "they are just too expensive". So they, including sommeliers and beverage managers, search elsewhere, usually ending up with something that is only distantly similar. This compromise is actually unnecessary. Bordeaux is a region, not a single area, and it encompasses over 50 different designated wine growing areas known as AOPs (Appellation d'Origine Protégée). The much discussed expensive Bordeaux is actually a reference to a handful of globally prized AOP wines: The wines from the villages on the left bank of the Gironde river just north of town that were classified in 1855. The similar wines from Graves and Pessac-Leognon close to town. Sauternes, the world’s most famous sweet white wine. And the areas on the right bank of the Dordogne river, Saint-Émilion and Pomerol.

That leaves about four fifths of the AOPs unaccounted for. In the past, ignoring them may not have meant a large opportunity lost, but with the prices of the majors having increased multiple times the rate of inflation for over 30 years and the quality of the other AOPs having improved steadily, now is the time to revisit that decision. The result will be a richer wine list with prices that are more customer friendly and margins that are more rewarding. Most of the wines that I discuss here are less than €15 ($18) retail in Europe, implying U.S. retail less than $30 after shipping and other costs. Yet they challenge the quality of the established AOPs.

MAKEUP OF THE CÔTES DE BORDEAUX

The Côtes de Bordeaux is a group of five Bordeaux AOPs who have joined together to jointly market themselves to the world. They are Blaye, Cadillac, Castillon, Francs, and Sainte-Foy.  To assist the consumer they use conjunctive labelling (so, for example, Blaye is labelled as Blaye - Côtes de Bordeaux). Producers can also just use the Côtes de Bordeaux AOP. A practice followed by some, for example Château Haut-Rian in Cadillac. On the map of the Bordeaux region the AOPs are dispersed widely. The difference in terroir shows in the wines.

Blaye - Côtes de Bordeaux: North of the city of Bordeaux on the opposite bank of the Gironde facing the famous Médoc region, this appellation of 6,500 hectares (ha)/16,250 acres (ac) produces virtually entirely red wine. The most planted red grapes are Merlot 70%, Cabernet Sauvignon 20% and Malbec 10%.  The average size of estates is 15 ha (37.5 acres) and there are 430 winegrowers.

Cadillac - Côtes de Bordeaux: The Gironde splits into the Dordogne and the Garonne just north of the city of Bordeaux. If you follow the Garonne fork Cadillac is on the right bank, opposite the city, although it extends much further south. It is 2,200 ha/5,500 ac. Estates average 11 ha/27.5 ac and 100% of the plantings are red. Merlot 55%, Cabernet Sauvignon 25%, Cabernet Franc 15%, and Malbec 5%.

Terroir: Limestone covered with pebbly gravel at the peaks, clay-limestone mid-slope, and fine gravel mixed with silica at the foot of the slopes. High sunshine.

Castillon - Côtes de Bordeaux: East of the city of Bordeaux, on the right bank of the Dordogne fork of the Gironde. Castillon is adjacent to Saint-Émilion to its west and the popular vacation area, the Dordogne, to its east.There are 2300 ha/5,750 ac planted with vines. It is all red grapes in the AOP. Merlot 70%, Cabernet Franc 20%, and Cabernet Sauvignon 10%.

Terroir: Modern alluvium in the north. Sandy gravel or sandy clay which turns into clay limestone or marlstone on the hillsides. Climate mild and humid. Partly maritime, partly continental.

On a recent visit to the appellation sponsored by the Union des Côtes de Bordeaux I came away with several lasting impressions. 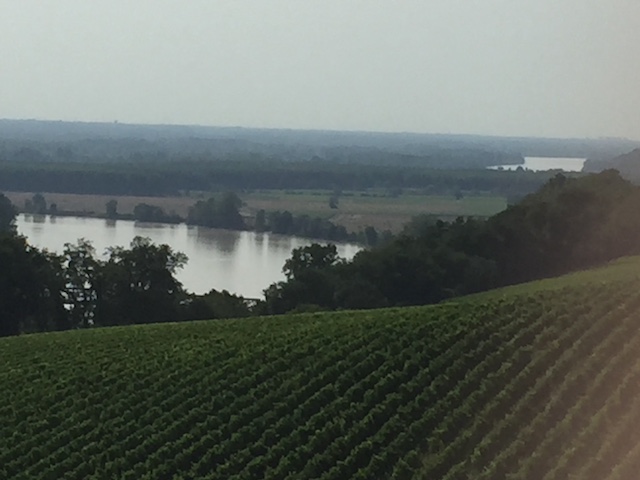 Second. Sainte-Foy - Côtes de Bordeaux, the smallest and newest member of the Côtes de Bordeaux (it only joined in 2016) may have the biggest throw-weight of all the constituent AOPs. It not only brings sweet white wines to the table, it also makes dry whites with oak ageing that complexifies the flavors and adds body to the mouthfeel. Try, for example, the wines of Château Hostens-Picant.