A Crash Course In Pinot Noir Regions Around The World 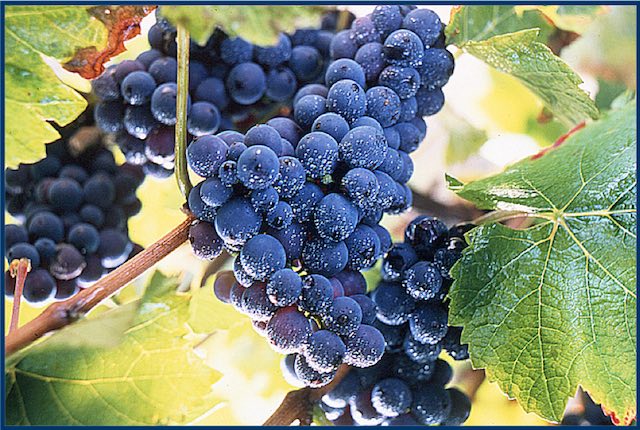 Pinot Noir explained according to some key wine regions of the world. (Excerpt)


Though one might wonder whether or not pinot noir really needs the PR — particularly after the still-curious phenomenon that is Sideways — the fact is the grape remains as mysterious as it is illustrious. Pinot noir is an incredibly temperamental grape that requires of the winemaker both sensitivity and audacity in equal measure. From this is born a band of Indiana Jones types across continents, all in search of pinot's greatest incarnation.

But the debate on what exactly this greatest incarnation should resemble is bottomless and legendary. Place one single pinot noir up to be evaluated by a panel of experts (as I experienced first hand several months ago) and it will likely receive both the highest honors and the most vicious rebuke, simultaneously. Arguments rage on. Color: Should pinot be anything but nearly transparent, ruby red? Alcohol: At what level of ripeness does pinot lose its aromatic identity? These disagreements even apply to the grape's origins.

There are two competing theories on pinot noir's beginnings. The first asserts that pinot noir originated — as all Vinifera varieties are said to have — between the Black and Caspian Seas where Turkey, Iraq, and Iran share borders. From there they were eventually schlepped around Europe by the Greeks and Romans. The second theory insists that pinot originated in Gaul where wild vinifera vines could have been quite easily domesticated. There are indications, as John Winthrop Haeger cites in his book North American Pinot Noir, that "vineyards may have flourished in what is now the Cote d'Or at least as early as the second century B.C."

All dispute over origin aside, there is no doubt that Burgundy is where pinot noir grew up. The first mentions of the grape by name date back to the 14th century and from then on its reputation only grew.

Today pinot noir is grown all over the world. In France, its greatest concentration is in Champagne, then Burgundy, Alsace, and the Loire. it's also grown in other European countries, most notably Germany, Switzerland and Northern Italy.

By the 19th century pinot noir found its way to America, Chile, Australia, and New Zealand, but in many of these places pinot's finicky nature and low rigor was at odds with the priorities of the winemakers at the time. Eventually each grew into itself and established unique expressions of the enigmatic variety. 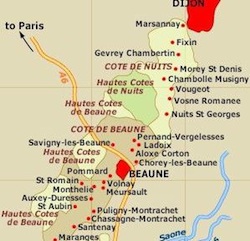 Burgundy is sometimes called the holy grail of holy grails, home to best pinot noir in the world. Located on the 47th north parallel, the Côte d'Or is home to around 11,000 acres of pinot noir, second only to Champagne. The Côte d'Or is broken up into two smaller cotes, the Côte de Nuits, which runs from Dijon in the north to just below Nuits-Saint-Georges in the south, and the Côte de Beaune which begins near Ladoix and extends south to Maranges, before running into the Côte Chalonnaise.

Soil: Bedrock is limestone and topsoil is mostly a varying mixture of limestone, clay, and flint.
Climate: Continental-ish. Warm summers (though not hot, per se) and cold (but not too cold) winters. Budbreak is usually around April, flowering in June, veraison in mid-August, and harvest around late September.
Top villages: Chambolle-Musigny, Gevrey-Chambertin, Vosne-Romanee, Vougeot, Nuits-Saint-Georges, Morey-Saint-Denis, Volnay, Pommard.
[photo: mcnees.org] 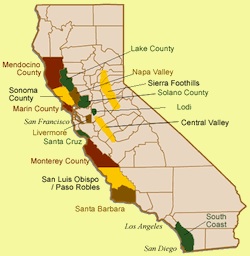 In the 1940s, most of the pinot noir in California was planted in the Napa Valley. By the 1960s plantings were established along the coast and in Carneros, and by the late 1970s both Monterey and Mendocino could claim pinot noir vineyards. The glut of the 70s lead to the renaissance of the 80s and 90s, a period of time that saw greater knowledge of location and an exodus to cooler sites. Today, pinot's main stomping grounds are in Sonoma County, Mendocino County, and Santa Barbara Country with important plantings dotted outside these large regions. The vineyards closest to the ocean like, for example, the extreme Sonoma Coast, enjoy a moderate marine climate characterized by warm afternoons and cool evenings with a moderating effect of both the marine layer and cooling winds off the Pacific Ocean. The further inland, the more sheltered from the marine influence and the hotter and more continental the climate becomes. 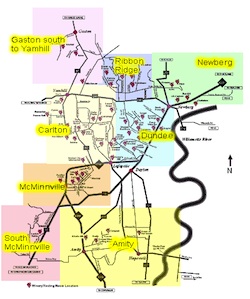 David Lett arrived in the Willamette Valley in 1965 at the age of 25 with 3,000 vine cuttings from Davis in the bed of his uncle's horse trailer. He originally planted them south of Salem in Corvallis, while he searched for vineyard land closer to Portland in the northern half of the Valley. In 1966 Lett purchased 20 acres at $450 each in the Dundee Hills. Four years later, he bottled his first Pinot Noir under the Eyrie label and sold it for $2.65 a bottle. The same year he harvested the New World's first Pinot Gris, a variety that would eventually become the Willamette Valley's signature white wine grape.

Though many warned Lett and the other Oregon pioneers that the climate was much too cold to be suitable to wine production he rolled the dice anyway. And in 1979, Lett's '75 Eyrie South Block Reserve Pinot Noir would take second place behind famed Burgundy producer Joseph Drouhin's 1959 Chambolle-Musigny in a blind tasting of American Pinot Noir versus French Burgundy. Oregon was officially on the international radar and pioneers looking for a piece of the action were pounding stakes into every naked piece of Willamette land.

Soil: A variable mixture of mostly volcanic and sedimentary soil, overlaid with any combo of granite, silt, loam and clay.
Climate: Significantly cooler than most pinot sites in California with cool and wet winters and dry, warm summers.
Top sites: The valley is sub-divided into six appellations based on climate, soil, elevation, etc. They are the Dundee Hills, Chehalem Mountains, Eola-Amity Hills, McMinnville, Ribbon Ridge, and Yamhill-Carlton District.
[photo: starchefs.com] 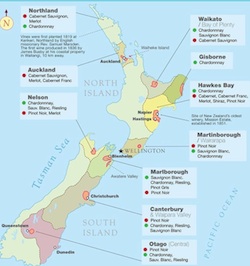 Though wine production dates back to colonial times, the first commercial plantings of pinot noir in New Zealand date back to around 1975. Today pinot is primarily grown in the south island, in Nelson, Canterbury, Marlborough, and Otago. Vineyard practices in New Zealand are notoriously conscientious and the majority of the country's wine producers farm organically. 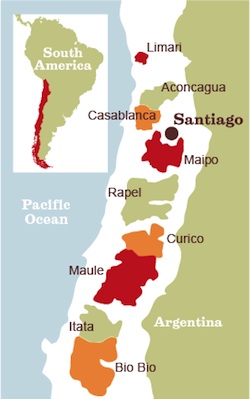 Chile is the youngest of these five main pinot producing areas. Just 20 years ago the country boasted just over 100 hectares of pinot noir (that number had grown to just under 1,500 by 2004). Today, the largest plantings of pinot noir are concentrated in three specific areas, each with the requisite cool climate that pinot craves. The coastal valleys of Casablanca and San Antonio to the south are bordered by the ocean and thus benefit from morning fog and cool breezes courtesy of the Humboldt Current. The Casablanca Valley — 60 miles northwest of Santiago and about 20 miles from the ocean — also grabs some of the same maritime influence, but the nights do not get quite as cool as they do in San Antonio/Casablanca and, thus, the wines tend toward more girth and heat.

The third region, Bío Bío, lies at a latitude of 37º south, making it a cooler climate by nature of latitudinal locale. The days are warm and nights are cool, providing for a long growing season. However, rainfall and winds can pose a significant challenge here, making it a region that requires a bit more courage than the others.