Narezushi: A Taste Of Ancient Sushi In Japan 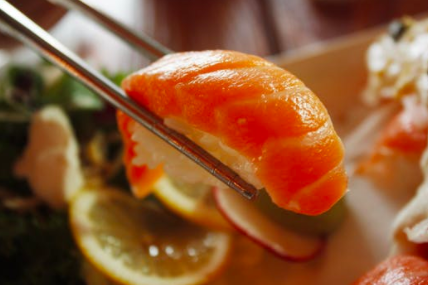 CNN "I don't think we should open it here," warns Kazuyuki Ohashi, the executive chef at Lake Biwa Marriott Hotel, as he motions toward a crowd of diners.

"It's like blue cheese -- some people like the taste, but it has a very strong smell."Ohashi is talking about sushi, but not the kind most of us are used to. "Narezushi", the most primitive, earliest form of sushi, is a world away from your California rolls and sliced sashimi.Dating back to the 10th century in Japan, this fermented fish was preserved with salt and raw rice, eventually giving way to the nigiri (sliced seafood atop rice) we know and love today.On a trip through the Shiga prefecture, where narezushi is still common, CNN Travel tracked down this ancient food tradition.

Narezushi is fermented fish pickled with rice -- a practice common in much of Southeast Asia around the 2nd century CE. It's thought to have migrated to Japan around the 8th century, but written documentation of "narezushi" didn't appear until the 10th century. "It's not totally clear when exactly narezushi began, but many people here consider this a family-style fish," says chef Ohashi. "Most families had their own recipes, passed down from generation to generation." “It's like blue cheese -- some people like the taste, but it has a very strong smell," says Chef Kazuyuki Ohashi, Lake Biwa Marriott Hotel.

Around Lake Biwa -- the largest lake in Japan, just north of Kyoto -- narezushi was a household staple and an important source of protein. In a time before refrigerators, families relied on rice and salt to ferment and preserve the fish -- usually stored layered in barrels -- in the hope of saving it for as long as possible.

Narezushi can be made with yellowtail, mackerel or ayu, but the most common type in the Lake Biwa area is funazushi, made from nigorobuna fish. Most families have their own distinct recipe, but all share a similar methodology.

First, the fish is scaled, gutted and preserved in salt for a few months. Then, it's combined with rice and left to ferment. As long as there's a dark storage space at room temperature, the fish can be left for a few months, years or even decades. For many centuries, people ate only the fish and threw the fermented "stinky rice" out.But around the 1500s, people began consuming half-fermented fish and rice together -- thus paving the way for modern sushi.

“The technique is a thing to be proud of -- we are proud of making this sushi for 1,000 years. When you eat funazushi, you can feel the history”

At first glance, narezushi looks nothing like modern sushi. It's usually sold as one whole fish, covered in a goopy, yogurt-like sauce.
To serve, sushi chefs will slice the fish into thin layers and arrange them atop a bed of rice in a beautiful pattern.
Sometimes, they prepare narezushi as porridge with hot tea (called ochazuke-rice), or even fry it up like tempura.
But no matter how it's prepared, narezushi is one of those divisive foods that will either make or break your dinner because of the sushi's sewage-like aroma and mouth-puckeringly sour taste.

Of course, for connoisseurs, the stinkier, the better.
"The people who love funazushi, they really love it. The first time I tasted it, I was actually in high school, around 16 or 17 years old," says Ohashi. "I thought it was really gross. But my father, who was also a chef, enjoyed these things. He put it in a soup for me, which I enjoyed much better." While he couldn't quite stomach it at first, Ohashi says the taste has grown on him over time.

“If done properly, even the head can be fully consumed. That's the sign of a good funazushi”
Chef Kazuyuki Ohashi, Lake Biwa Marriott Hotel

"Now I enjoy it. Over time, the lactic acid and bacteria in the rice breaks down the fish and, if done properly, even the head can be fully consumed. That's the sign of a good funazushi," he adds. "The technique is a thing to be proud of -- we are proud of making this sushi for 1,000 years. When you eat funazushi, you can feel the history." To Ohashi's knowledge, the oldest funazushi has been fermented for a century. "If it's 100 years old, it's still not rotten because of the fermentation," says Ohashi. "By that time, it wouldn't be much more than liquid." The older it is, the rarer it is -- and old narezushi can cost hundreds of US dollars, though the most common types will have aged for about one year.

If you're in Japan, narezushi is actually pretty easy to find.
It's even sold on Amazon. But for higher-quality versions, travelers will find traditional vendors along the shores of Lake Biwa.Kimura (725 Gosanjocho, Hikone-shi, Shiga Prefecture; +81 749 22 1775) is one such institution, having sold the dish for more than 50 years.

"Because the fish itself is scarce nowadays, people can't catch enough and we consider this a special meal... it's no longer a common thing," Akiko Higashimomo, a shopkeeper, tells CNN Travel.

"It's reserved for family gatherings and special occasions. Because it has a distinctive strong taste it's not a thing that you eat every day."Finding it in a restaurant is a bit more challenging, at least for travelers, partly due to language barriers.One restaurant that comes highly recommended is Korian (2307 Makinochokaizu, Takashima 520-1811, Shiga Prefecture; +81 740 28 1010).

Located on the northwestern edge of Lake Biwa, the restaurant serves funazushi several ways -- on a bed of rice, in porridge or in soups.Enjoy it in the traditional Japanese tatami-mat rooms or by the terrace overlooking the lake."If you eat a little bit, try it with sake," suggests Higashimomo. "It also goes well with wine, because it's like a blue cheese."