What Will It Take To Make Restaurants Safe For Women Working Front Of House? 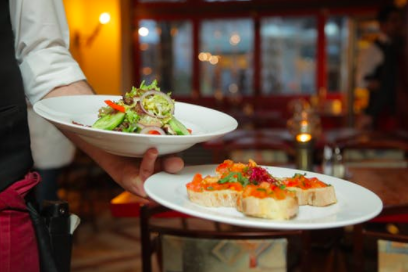 Service jobs are the first work environments that many young women experience—and where they're first taught to endure harassment.

Since chef John Besh was outed as a serial sexual harasser by over two dozen female employees in October, the restaurant industry has been in the weeds with allegations of harassment against industry giants like Mario Batali and Ken Friedman. Much of the conversation around these revelations has been focused on the the “boys’ club” culture in restaurant kitchens and the abuse of power by men in positions of authority, but the industry won’t change unless we address how this culture spills over into the dining room, where the perpetrators are both restaurant staffers and customers.

Restaurant work is typically regarded as a “male-dominated” industry, and that may be true in kitchens, but women make up over 70 percent of front-of-house waitstaff, according to the Restaurant Opportunities Centers United. These women face the harassment you’ve read about at the hands of power-hungry men twofold.

When women’s livelihoods relies on men’s approval of their ability to serve, men often take full advantage of their position. ROC United reports that while only 7 percent of American women work in restaurants, “more than a third of all sexual harassment claims to the Equal Employment Opportunity Commission come from the restaurant industry.”

Of the women surveyed by ROC United, 25 percent disclosed that “as a result of unwanted sexual attention in their workplace,” they sought new employment.

But this type of behavior from male customers isn’t limited to restaurants where the uniform is orange hot pants and a tight white tank top with a slang word for breasts strewn across the front. It doesn’t matter if a woman works at a Michelin-starred restaurant or a hot wings chain; the power dynamic has already been established by decades of norms about what being a “waitress” means. There is no place in a restaurant where a woman is entirely safe from harassment, and trying to avoid it, women have been told, is impossible and pointless.

Working front of house, our jobs as women are the same as our male counterparts, but as performed on a tightrope engulfed in flames. If we’re too friendly to our male coworkers and customers, it can be misconstrued for flirtation, an invitation for harassment and assault. If we’re seen as being too focused and serious, we’ll run the risk of receiving a low tip. If our male coworkers think we’re uptight, they won’t prioritize our tickets or bus our tables efficiently, which translates to slow service for our tables and an even lower tip.

So we often put up with the harassment, or we simply leave our jobs. Of the women surveyed by ROC United, 25 percent disclosed that “as a result of unwanted sexual attention in their workplace,” they sought new employment, contributing to what the Bureau of Labor Statistics reports as a high turnover rate in the restaurant industry.

But changing jobs is never an easy out, especially in a profession where seniority means you’re guaranteed to get the best shifts. Leaving a job when you’ve reached a breaking point of sexual harassment means you’re forced to start over again, and your paycheck suffers accordingly. For women working states where there is a “sub-minimum wage”—currently $2.13 per hour for tipped employees—the risk of experiencing sexual harassment is twice as high as it is for women in states with one standard minimum wage, according to the ROC United survey. These low hourly wages are often paid entirely to taxes, resulting in a “zeroed out” check and 100 percent reliance on tips for survival. Women in sub-minimum wage states reported a double dose of misogyny—they were three times more likely to be encouraged by management to dress “sexier” as a way to improve tips and keep customers happy.

This ingrained idea of servitude and the necessity of tolerating uncomfortable situations can spill over into their future work in other industries.

Restaurant work is high-pressure and physically demanding. It requires long hours for pay that sometimes feels insufficient for the treatment endured during each shift, and it’s often so taxing that the standard way most restaurant staff come down from the adrenaline high is to head to the nearest bar post-shift and blow off steam by drinking heavily with their comrades. This alcohol- and drug-infested environment further blurs the already muddy professional lines in restaurant work, and leads to more situations where harassment and assault can fester.

Restaurants are the first work environments that many young women experience, and these blurred lines lay the foundation for what they understand to be normal and acceptable behavior in a professional setting. This ingrained idea of servitude and the necessity of tolerating uncomfortable situations can spill over into their future work in other industries.

As these stories continue to come to light, restaurant owners are looking for ways to 86 sexual harassment from the industry. But, it remains unclear whether that’s possible without serious change in the culture of dining out. Progress necessitates a serious overhaul in our perception of “the way it is” for front-of-house workers.

What can restaurants do to change? There are the obvious solutions: increasing the tipped minimum wage to match the federal minimum; implementing sexual harassment policies and training for all staff members; and training management to support waitstaff when coworkers and customers cross the line. Most importantly, employers should listen to women and create an environment that makes them feel comfortable enough to report these incidents.

At first, we may only see these changes happen in restaurants with both reputations at stake and the funds to build these training programs. But thanks to the victims who have come forward thus far, a decline in sexual harassment cases and a major cultural shift in this country—both in and out of restaurants—are now being seen as a necessity, not just another pipe dream on the menu.