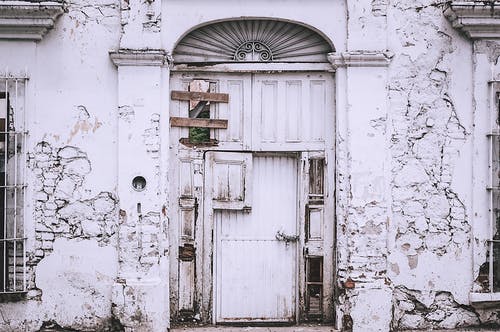 What started out as a couple's renovation project to convert a historic building into a bar has turned into an effort to restore decades-old artwork in a small Washington town.

Nick and Lisa Timm purchased the building in Okanogan, located about four hours east of Seattle, at the end of 2021. This past week, they discovered 60-foot murals painted on canvases along its north and south walls.

"We were about 20 minutes from covering up the walls," Nick told CNN on Wednesday. "I then was like 'Well, let's just look at what's behind all this plaster.'" As the plaster peeled away, they discovered a giant mural -- stretching 60 feet long and 20 feet high -- depicting a lake, cabins and trees.

One crewmember threw out the idea that there could be another canvas on the opposite wall. Lo and behold, there was indeed a matching mural.

They found the murals at around 5 p.m. and had been working since 5 a.m., Nick said. But the team stayed for four more hours to uncover the rest of the artwork.

"It was like a lightning bolt of energy," Nick said. "We were just hooting and hollering and pulling things down."

Lisa and Nick Timm purchased the historical building at the end of 2021.

The Timms moved back to Okanogan last year to take care of Nick's father, who was diagnosed with lung cancer. After he died in September, a family friend told the couple about the chance to purchase the building.

"One of our main goals moving back was to reenergize Okanogan and then this happened," Nick said.

Dating back to around 1907, the building had served as a movie theater, a pool hall and even a rooster fighting rink, according to Nick.

The couple's plan was to turn the 3,000-square-foot space into a bar and gathering place for the community, building on Nick's experience running bars and restaurants in Olympia.

"It's funny how this worked out," Nick said. "We were going to make it a historical showcase by bringing in a bunch of historical stuff about the area."