After Reopening, Restaurants Again Shutting Their Doors As Coronavirus Flares 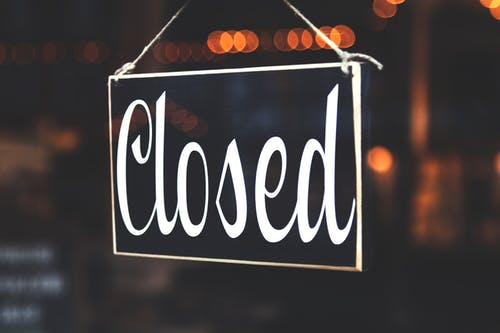 Some restaurants that had reopened in states now seeing a rebound in coronavirus cases are again having to shut down — a scenario public health experts had warned about and that business owners had feared.


In Texas, which started its reopening May 1 after weeks of being locked down, at least a dozen restaurants in and around Houston have recently posted announcements of temporary shutdowns to sanitize their establishments and test employees after cases of the virus emerged.

The city's Taste of Texas also temporarily closed after an employee tested positive, the steak house said Saturday in a post on social media. "Once 100 percent testing of our Taste of Texas team is complete, we will reopen," the eatery stated. A similar statement came a day earlier from the Relish Restaurant & Bar, also in Houston, which said it was temporarily closing to test all of its workers after one employee became infected.

After an employee lost their sense of taste and tested positive at Yaga's Cafe and Beerfoot Brewery in Galveston, the eatery opted to put its operations on hold, Mike Dean, president of Yaga's Entertainment and Island Holdings, posted Sunday on Yaga's Facebook page.

"I decided to allow any employee for their personal sanity to go to Hospitality ER on MY dime to get tested. We have received more positive tests none of which were symptomatic and decided to push the pause button," Dean wrote. "I will meet with the health department Monday and get advice on what next steps should be."

Only one in five restaurant owners in cities that were shutdown in mid-April said they were certain that they would be able to sustain their businesses until normal operations resume, according to a survey released by the James Beard Foundation and the Independent Restaurant Coalition.

Nearly 2,000 Texans have died of the coronavirus, while more than 16,000 people in Harris County, home to Houston and the most populous county in in the state, have come back positive for the disease, according to data from Johns Hopkins University.

On Tuesday, Texas reported an 8.3% increase in hospitalizations to a record 2,518, the largest daily jump since June 4. The rolling seven-day average rose to a record 2,243, according to the state health department.

A recent spike in cases in Harris County prompted Judge Lina Hidalgo to outline a four-tier public threat system, with the danger currently at level 2, or "significant," and people advised to minimize contact with others. The county's stance is seemingly at odds with Texas Gov. Greg Abbott, who last week increased to 75% the capacity at which dine-in restaurants across the state could operate.