Arsenic Levels In Rice Are Rising Due To Climate Change 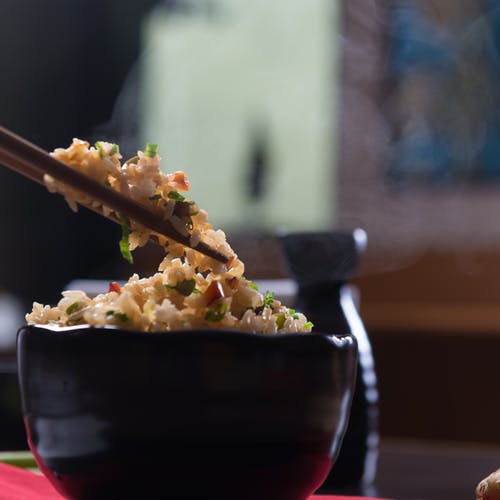 Rising temperatures caused by global warming could cause the amount of arsenic in rice to triple by the end of the century, a new study warns.

The toxic chemical gathers naturally in the crop, and research has now proved that rising temperatures increase its presence in the grain.

Arsenic can cause significant health problems and has been linked to illness, dietary-related cancers and liver disease. In serious cases, it can result in death.

Rice is a staple of diets around the world, and is relied upon by millions of people in developing countries to provide valuable calories and nutrients.

Arsenic is a toxic chemical which, in high enough doses, can cause serious health issues. It is found naturally in rice (pictured) and research has now proved that rising temperatures increase its presence in the grain

HOW DOES ARSENIC GET IN RICE?
Rice can contain small amounts of arsenic, which in large doses is a toxin linked to multiple health conditions and dietary-related cancers.

Arsenic occurs naturally in the soil, though its concentration is higher in areas that have historically used arsenic-based herbicides or where irrigation water contains arsenic.

When farmers grow crops like rice under flooded conditions, arsenic is drawn out of the soil and into the water.

A rice plant is like a big tube or a straw as it draws water up from its roots to its leaves.

Rice naturally takes up arsenic because the arsenic mimics other molecules that these plants preferentially draw out of the soil.

Arsenic is a toxin for rice plants too, and they have mechanisms to protect themselves against higher levels of it. One method includes turning on a protein that sequesters arsenic in specific cells and tissues of plant.

Scientists at the University of Washington in the US grew rice and replicated various temperatures to mimic growing conditions under various global warming projections.

The most extreme test envisioned a future where the average temperature is 8°C warmer than today - a situation which would have a catastrophic impact on farming as a whole.

In this experiment, the plants were so stressed that they failed to produce any usable grain.

Current climate goals, as outlined under the Paris Agreement, are seeking to limit global warming to 3°C above pre-industrial levels, with the hope of restricting it even further to just a 1.5°C rise.

Plants grown in warmer conditions were found to have higher levels of arsenic throughout the plant - including the grains.

'We know that more arsenic is released from soil at higher temperatures,' said Dr Rebecca Neumann of the University of Washington.

'Here we saw this response to temperature in the soil impact the arsenic content of rice grain.

'We were working with soil that had relatively low arsenic levels, but the warmer temperatures still led to increased arsenic concentrations in the grains at ranges where we begin to have health concerns.

'If these results are representative of what we might expect for field-grown rice, then climate change could exacerbate the problem of arsenic-contaminated rice.'

Arsenic occurs naturally in the soil and is increased in locations that have used arsenic-based herbicides or water laced with the toxin for irrigation.

Rice is grown under flooded conditions and this draws arsenic out of the soil and into the water, ahead of eventual absorption by plants.

Rice is particularly vulnerable because arsenic mimics other chemicals the plant absorbs via its root system, allowing the toxin to bypass the plant's defences.

'In general, the plant is like a big tube or a straw as it draws water up from its roots to its leaves,' said lead author Yasmine Farhat, a doctoral student in civil and environmental engineering.

'And rice naturally takes up arsenic because the arsenic mimics other molecules that these plants preferentially draw out of the soil.

'It's a perfect storm for concentrating arsenic.'

Under the highest temperatures, arsenic concentrations skyrocketed in the stem, leaves and grain.