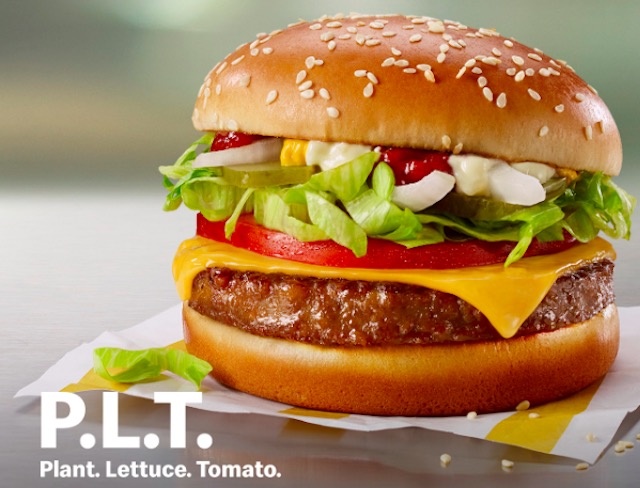 Going meat-free for Meatless Monday is no longer Mission: Impossible.

In a year that has seen skyrocketing increases in new plant-based products on restaurant menus from Del Taco, Qdoba Mexican Eats to Burger King and grocery stores’ shelves, more options are being added.

Last week, McDonald’s got closer to joining the movement when it announced the plant-based P.L.T., which stands for plant, lettuce and tomato, was coming to North America for a test, albeit north of the U.S. border.

McDonald's announcement to feature a patty developed exclusively for the chain by Beyond Meat came the same day Impossible Burger made its East Coast grocery store debut in 100 Wegmans locations and the same week the Nestle Brand announced the new Sweet Earth Awesome Burger was joining the plant-based burger wars.

According to an analysis in June by food industry organization Dining Alliance, sales of meat alternatives in restaurants increased by 268% this year compared with 2018.

In a blog post, Dining Alliance President Christina Donahue says the spike in sales was probably due to the quality of meat substitutes getting better, restaurants realizing consumers want more options and seeing they “may be able to charge premium pricing for meat substitute products.”

Though meat-free burgers have been the most popular, KFC took flight when it tested Beyond Fried Chicken at one Atlanta-area location, and it sold out in less than five hours.

In restaurants, in particular, the products are more for flexitarians than strict vegans and vegetarians. Burger King's limited-time Impossible Whopper is cooked on the same broiler as the regular Whopper.

David Lee, Impossible Foods chief financial officer, said that although the brand’s products are vegan-friendly, the growing demand has been among meat-eaters.

“I think there have been many products in the past that appeal to those who are plant-based,” Lee said, noting more than 90% of customers self-identify as meat eaters. “But I think our growth is squarely in the hands of meat-eaters who maybe had to compromise before.”