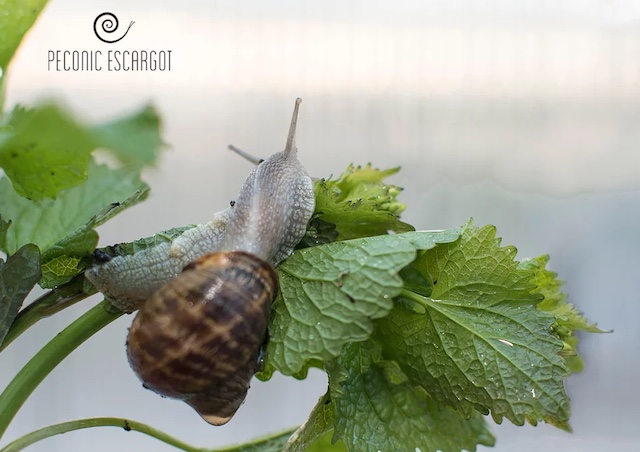 A few years ago, after working at world-renowned, cutting-edge restaurants like Copenhagen’s Noma, Taylor Knapp was shocked to learn that many of America’s top chefs got their escargots from (gasp!) a can.

So, after settling on Long Island’s North Fork, where he got a job as a chef, Knapp in 2017 launched his own certified (and rare) snail farm, selling the delectable gastropods to top chefs like Jean-Georges Vongerichten, Daniel Boulud, José Andrés and Daniel Humm.

“I like the Long Island guy’s snails,” Vongerichten says of Knapp. “They are smaller, have a lot of flavor, and they are a different species from the canned snails.”

Knapp specializes in petit gris, or “little grey” snails, which he says are like the bay scallops of the snail world. His first ones came from California and trace their lineage to snails brought over from Europe in the 1850s.

“Canned snails are like eating clam strips instead of clams fresh out of the shell,” Knapp says. “It’s a different texture and flavor — like a chewy piece of canned meat or rubber instead of a fresh clam or mussel. We also have transparency in how we raise them.”

Knapp — who breeds up to 70,000 of the hard-shelled, tentacled critters a year in a 300-square-foot greenhouse in Cutchogue — says between 100 and 200 snails live in containers with mesh-screened lids, where they feast on calcium-rich dirt.

As they get older, the snails are moved to a larger pen, where they are “finished off” with foraged greens like dandelion, mugwort, burdock, and clover, as well as herbs, including mint, tarragon and basil.

“You are eating what the snail ate 48 hours ago, so we make sure they eat something yummy and purge the dirt,” Knapp says.

Drew Hiatt, executive chef at Vongerichten’s Topping Rose House in Bridgehampton, tells Side Dish that there is no comparison between fresh and canned snails.

Knapp’s snails are “fresh, really briny and have great flavor,” Hiatt said, adding that fresh snails are also more versatile than the canned ones. While the latter are usually hidden under cheese, garlic and parsley, Hiatt used fresh snails rather than clams to prepare a squid ink linguini special.

“It flew out the door last summer,” Hiatt said.

Knapp’s Peconic Escargot is one of a handful of snail farms certified by the US Department of Agriculture, leasing land from the Peconic Land Trust, which helps incubate farmers by leasing land at discounted prices.

Knapp now sells everything from the snails — with or without their shells — to snail caviar, which costs $125 for 40 grams.

The caviar is white and the size of salmon roe and, like traditional caviar, is cured with salt. Snails lay only 50 to 100 eggs a year — with an “earthy and woodsy” flavor that is anything but fishy thanks to their diet.

“To my knowledge, no one else in the US is selling American snail caviar,” said Knapp, who recommends pairing it with “earthy ingredients,” like beef, lamb and root vegetables.

“But it’s also amazing with Lay’s Ruffles and sour cream and onion dip. Really!” he added.