The Ravages Of Time On Wood-aged Beer 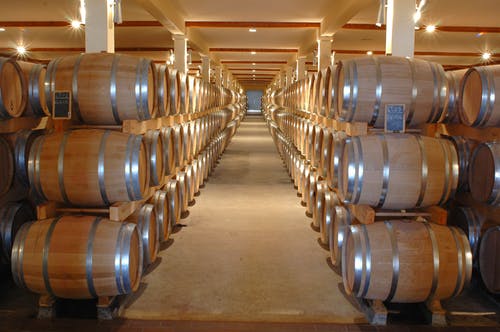 Time is a transformative ingredient in wood-aged beer. Neil Fisher of WeldWerks Brewing shares what he’s learned about making beers that stand up to extended aging.

Like many brewers, when we loaded into barrels our first renditions of the beer we’d later name Medianoche, we planned on then-standard 9- to 12-month aging process, and the recipe we used (which was similar to the homebrew recipe I shared in the Spring 2014 issue of Craft Beer & Brewing Magazine®) reflected that.

It was a big beer with a long boil and a high starting gravity (28–30°P, around 1.120 standard gravity), and while it tasted great after a year, we saw the potential for making it better by reconstructing the recipe to stand up to longer aging in the barrel. When we let that 9 to 12-month recipe go for 14–15 months, the base recipe started to disappear, and over time the returns diminished.

We found that we like more age than we thought, so we went back to the drawing board to design a hardier beer, having learned quite a bit over that first year of tasting our barrel-aged stout as it aged. We thought we could make it better, and that was all determined by how much patience we could have with the barrels. The first step was to increase the gravity, which we pushed up to around 35°P (1.154 SG).

I’ve been delving into the science of it, and one thing I learned was that a degree of Plato is not interchangeable between malt and other sugars. They measure the same, but the way we drink and experience them and the way they age are all different. A degree of Plato that you derive from dextrose is different from what you derive from sucrose is different from maltose or fructose.

I’ve seen that it’s more a product of the maturation of sugar and the effect of the oxidative reaction—how that impacts our perception of sweetness—and I think maltose is probably the most delicate in giving you the benefit of mouthfeel without cloying sweetness in the finish. Maybe it’s hocus pocus, and there are plenty of brewers who find success adding sugar in different ways to achieve their alcohol and gravity goals, but for what we want in a stout—a beer with chewy body and a luxurious mouthfeel that can hold up after 18 months in a barrel—malt is the only way to achieve it.

Fermentations with simpler sugars such as dextrose tend to spike initially, and while they still finish out in the same place after 7 to 8 days, we see cleaner fermentations with all malt. The growth phase is pretty normal with malt, where when we’ve added 3–4°P in simple sugars, it really throws off the fermentation character.

Tweaking malt character to account for the additional sweetness and body in longer-aged beers is crucial. If you were to drink last year’s Medianoche alongside this year’s, you’d notice that this year’s is both sweeter with a better mouthfeel, but it’s also more roasty. We’ve always wanted to keep our stouts firmly in the stout category, and I think a lot of beers labeled “barrel-aged stout” are actually porters because there’s not much roast to speak of. Arguing about stout and porter is ultimately silly, but I like to think that the biggest distinguishing factor is roast, and I think a stout with no roast character is honestly not a stout.

If you age a stout for 2 years, that bright, roasty malt character is going to diminish, so we’ve upped the roasted barley and chocolate malt component in our recipes to offset that. As percentages, we’ve upped the 15 percent roast and chocolate malt (200 Lovibond or higher) in our 12-month recipe to closer to 25 percent in our 18-month recipe. We also upped the hops bitterness, knowing that it’s going to age out anyway.

The finishing gravity of these stouts is pretty close to the starting gravity of Juicy Bits, so knowing that the beer was going to come out of the barrel that sweet, we didn’t want it to taste cloying even after 18 months. Barrel choice impacts this as well because older barrels tend to impart a more rounded character, while younger barrels will contribute more tannins. We’ll also adjust the roast-malt component based on the char level in the barrels since the char will add some smokiness.

ADVERTISEMENT
Not Your Grandmothers Nonalcoholic (wide - 04.01.19)
One downside of changing up the recipe like that is that we have to let the beers age that long, so to offset that, we’ve actually started brewing both 12- and 18-month recipes, since that will give us some flexibility to blend the characters we like from each to create different beers. We’ll soon be blending some 24-month beer with 18- and 12-month beer to explore that added complexity.

Another contributor to long-term mouthfeel is oat content. It may just be in our heads, but when you do something that produces good results and you try something that produces better results, you don’t move away from that. We upped the oat content as we upped these other factors because we were afraid if we went too roasty, we’d need a bit more sweetness, but we didn’t want a caramel sweetness. The oat percentage is about 10 percent—by definition, it’s an imperial oatmeal stout.

We have been experimenting with other mouthfeel-oriented malts—Carapils, dextrin malts—but those are harder because they’re simply adding unfermentable malt character. We have seen good results from chocolate rye, which adds some mouthfeel—we’ve used it in just about every stout we’ve brewed over the past 2 years. Everyone loves to talk about the spice of rye malt, but there’s a mouthfeel component to it as well.

If we know we have a barrel that’s going to go 18 months, we up the IBUs to about 80. We go for as clean, high alpha as we can, so we typically use Magnum or Warrior. Any other hops character other than bitterness would just not be pleasant after 18 months. To avoid vegetal character from the hops, we don’t add at the start of the boil, but add with 90 minutes to go.

Speaking of the boil, whether you’re in a commercial brewhouse or homebrewing, no one typically has mash tuns large enough to run off enough high-gravity wort to hit that gravity, so we developed a three-mash process that involves boiling for more than 30 hours. We have one tank in the brewery devoted to Medianoche, so every 4 weeks we’re running a 30–34 hour boil.

Our 15-barrel mash tun will essentially yield 8 to 9 barrels to the kettle per turn when you factor in no sparge (first runnings only) and boiling for eternity—by the time we’re done boiling, that 24–27 barrels that we’ve run off reduce to the 15-barrel batch we knock out to the fermentor. We do two mashes on day one, boiling constantly, and then a third mash on day two. At the end of the second day when the kettle is topped up and we’re getting close to the end, that’s when we do our adjustments on gravity and shorten or lengthen the boil to hit our intended gravity before we start that 90-minute hops addition.

We’ve now installed automation that controls the boil overnight, but up until a few months ago, I’d routinely take the third shift once a month and spend the night on a couch at the brewery, monitoring the boil.

When is a barrel-aged beer done?
We usually don’t start tasting our barrels until they’re a year old. Sometimes we’ll get curious and pull a nail before that, but we never have any intention of releasing it before a year. At 12 months, we get a snapshot of what the barrel is like.

Two months later, we’ll come back to it and compare tasting notes. Mouthfeel is the most difficult thing to pick up on when tasting the beer still (not carbonated) and out of the barrel because just a touch of carbonation helps you get a better perception of the mouthfeel. Still, it’s really hard to tell what that mouthfeel is going to be like in a finished beer.

A lot of our brewers, and our brewer friends, struggle with that. But tannins are one way to earmark that as they definitely have a negative effect on mouthfeel. If we start to see a significant increase in tannins over the 12-month tasting notes, we’ll fast-track that barrel for packaging to maintain the mouthfeel and flavor we want.

I like a little tannin in the beer as it helps balance out some of the residual sweetness, but too much and it becomes unpleasant. We put so much work into building that mouthfeel, from our 30-hour boil and big-malt base, and tannins can swoop in and wreck it all as they pull you out of that big bold vanilla, caramel, and fudge sweet-stout note into a sharp harshness. Anything with a tannin expression—wine, tea, etc.—pulls you away from the sweet and rounded velvety mouthfeel. Tannins are what cut that link from mouthfeel to finish to aftertaste.

Aftertaste is what we all remember most—you can have some amazing flavors up front, but if the beer finishes with nothing or is cloyingly sweet or is astringent, that’s when you lose sight of that beer. You have to stick the landing, and tannins are the first thing that start to undermine that.