The Science Of Barbecue 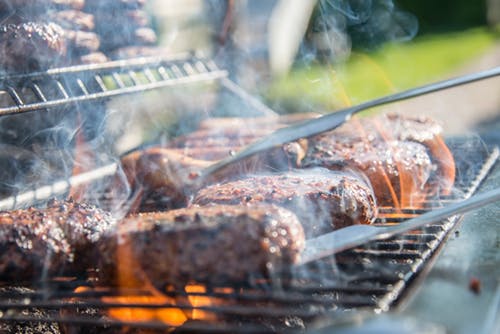 Barbecue is a communal celebration. Meat set adjacent to burning wood broadcasts a chemical invitation to a shared sensory experience, girdling entire communities in the same smoky amphitheater. Decades of repetition have transformed the etchings of these regional sensory memories into deep partisan trenches filled with lore and dogma.

The “barbecue wars” revolve around a constellation of divisive choices: beef or pork, dry rub or wet mop, mustard or tomato. Culturally, these are important distinctions that trace their roots back through centuries of agriculture, economics, politics, slavery and religion. But chemically, these are all false dichotomies—arbitrary stakes in the ground along a single universal continuum that unites all barbecue.

Like other animals, humans have a threshold of detection for volatile compounds generated by fire that is tuned taut as a trip wire to alert about impending danger. When we evolved to conquer fire and bend it toward deliciousness, we turned that primordial paranoia into a lens to help our senses zoom in and parse the rainbow of flavors embedded in wood smoke.

All woods used for smoking meat—hickory or oak, cherry or apple, grapevine or mesquite—store their delicious potential in the same basic larder of cellulose, hemicellulose and lignin. These carbohydrates are massive hulking molecules, dull monoliths with nothing interesting to say to our taste buds or nostrils. When burned, however, they splinter and fragment into kaleidoscopic arrays of taste and smell, including tangy acids, fruity esters, spicy phenols and nutty furans.

The wood’s age, growth conditions, genetics and storage history endow the raw fuel with latent complexity. The temperature of the fire, level of oxygen and geometry of the smoker combine with these defining features of the wood to mark each barbecue pit with a signature chemical fingerprint that has nothing to do with state lines.

CHEMICAL INTERACTION
To an observer standing within nose’s reach of a barbecue pit, smoke is the fleeting shadow of a perfumed cloud passing overhead, gone a few seconds after it arrives. Luckily, meat contains tools for memorializing the character of that smoke in a detailed flavor snapshot. Water, fat and proteins embedded in a piece of barbecue each capture a different angle of the smoke’s portrait.

Flavorful compounds fall along a spectrum of solubility, with water on one side and fat on the other. Taste-active players like salty minerals, sour acids, sweet sugars and savory amino acids primarily prefer water. Fats cover most of the aroma spread, providing safe harbor for roasted, spicy, meaty, floral and peppery scents to land. Proteins bridge the gap, scooping up a mix of water-loving and fat-fancying flavor stragglers to fill in the missing pieces of the smoky puzzle.

As meat sponges up this smorgasbord of smoke, it also brings its own deliciousness to the party. Excited by the heat of the smoker, proteins and trace sugars inside the meat fuse and explode into brown pigments that darken the meat’s surface into an earthy bark. Iron, used by animals to ferry oxygen to active muscles, goes rogue, slicing any fat molecules it can reach into fragrant ribbons of gamey aroma compounds. Iron creates a visual record of its tasty mischief by teaming up with smoke-conveyed gases like nitric oxide to leave a thin ring of pink graffiti beneath the outer walls of the meat’s surface.

Muscle fibers are long, elastic cells lined with legions of microscopic protein oars that churn in coordinated bursts to generate movement. Each cell contains a droplet of delectable juice. Exposure to heat during cooking causes the protein rowing crews to give one last tug, bursting their cellular balloons and spilling their cocktail of water, sugars, salts and acids.

But if given enough time, proteins will repent from their reactionary ways and rescue barbecued meat from dryness. The prolonged heat of a smoker causes thick, knotty cords of protein to unwind. These liberated protein strands act like peacekeepers to corral flavor-laden juices and rendered fat, binding everything into a jiggling mass that bursts when bitten.

SAUCES AND SEASONINGS
Some of the most heated barbecue disputes rage under the banners of various approaches to saucing and seasoning smoked meat, but all of these methods target the same general end point. Barbecue cooked just to the point of knife-tenderness can be carefully sliced while retaining much of its inherent succulence, leading some to label sauces as a sacrilegious affront to such juicy bounty.

On the other hand, cooking meat to the point at which individual muscle fibers can be shredded apart results in increased surface area. This allows more water to escape, but it also opens more real estate where tasty sauces can reside. Lubricated food more easily fills our taste buds and nostrils with its mouthwatering messages; the origin of the moisture is up to the cook.

Likewise, our senses tune out when food becomes monotonous, so the best barbecue tends to house a diverse mix of flavorful personalities. Sourness cuts through taste-numbing cascades of hot fat. Some believe in the virtues of adding acids through marinades or glazes containing vinegar, tomato, mustard or honey. Others allow sauceless barbecue to simply pull volatile acids from the smoke itself. A sour payload gets delivered either way.

Those who proclaim that their salt-and-pepper-and-nothing-else approach is superior to the use of spice blends (and vice versa) are missing a similar point. Seasonings like paprika, cloves, vanilla, garlic, cumin and brown sugar draw their flavor from the same molecular spice cabinet as wood smoke. Pitmasters may choose to amplify or downplay certain flavor notes, but they’re all remixing the same basic song.

At the table, crispy pickles, chilled slaws and other garnishes provide diverse sensory counterpoints to keep our minds limber enough to continue enjoying bite after bite of hot, hearty meat. Whatever wood we burn, however we prepare the meat and whatever else we add to our table, every barbecue meal is a quest to deliver on the promise broadcasted by that first heady whiff from the fire.