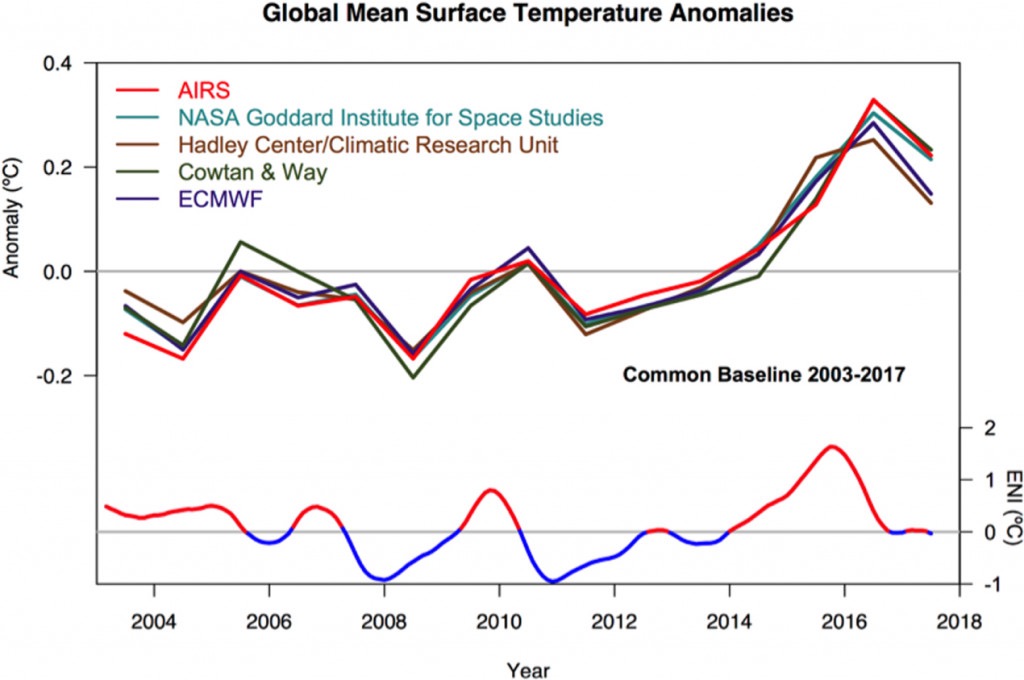 This is an important piece of information for those in the wine industry. Perhaps the business plan may need to change drastically.

Just in time for Earth Day, new satellite data corroborates scientists' findings that the Earth is warming at an alarming pace.

The new data, from the Atmospheric Infrared Sounder (AIRS) on NASA's Aqua satellite, corroborates findings from the Goddard Institute of Space Studies Surface Temperature Analysis that showed 2015, 2016, and 2017 were the warmest years on record

The GISTEMP data, until now the most comprehensive kept by the U.S. government, uses land based thermometers, as well as many based on buoys and elsewhere at sea, to record temperatures and takes an average. AIRS uses 2,400 wavelengths of light to create 3D maps of temperature, humidity, and clouds throughout the atmosphere.

What's striking about the new study is how closely its recordings mirror those of GISTEMP over the years 2003 to 2017. One weakness in the GISTEMP data is that its findings from polar regions are sparse because it's difficult to keep instruments working there and there are fewer weather stations with those instruments.

The AIRS satellite data, however, is perfect for filling in those gaps. It shows that temperatures in the arctic rose faster than GISTEMP data has shown: 2.5 degrees Celsius (4.5 degrees Fahrenheit) per decade, since 2003. To avoid the most catastrophic damage from climate change, the Paris Climate Accord has set a target to keep average global temperatures to 1.5 degrees Celsius (2.7 degrees Fahrenheit) above pre-industrial levels. Cooler polar regions trapping water in ice sheets is key to that goal.

The new data reinforces findings that the Arctic is warming faster than previously acknowledged and that understanding warming in the Arctic is important to what's happening in the rest of the world," UC Berkeley scientist Zeke Hausfather told The Washington Post.

The new data from AIRS gives scientists far greater confidence in the accuracy of existing global temperature measurements that show the Earth is warming.

“The estimates that we’re getting of the trends from the surface temperature network and ocean buoy network is matched to a ridiculous certainty by the trends that we’re getting from this remote sensing,” said study co-author Gavin Schmidt, a NASA scientist who leads the GISTEMP study, in a Scientific American report.

Such correlation will make it more difficult for critics of climate change theory to thwart efforts to mitigate global warming. The AIRS satellite data relies on more up-to-date infrared readings. The data coming from satellites scanning the Earth puts to rest concerns about surface temperature readings coming from urban "heat islands," and polar readings coming only from coastal edges.

Of course, confirming that the world is warming faster than we thought is not good news. But confirming climate science gives us better tools to fight it.