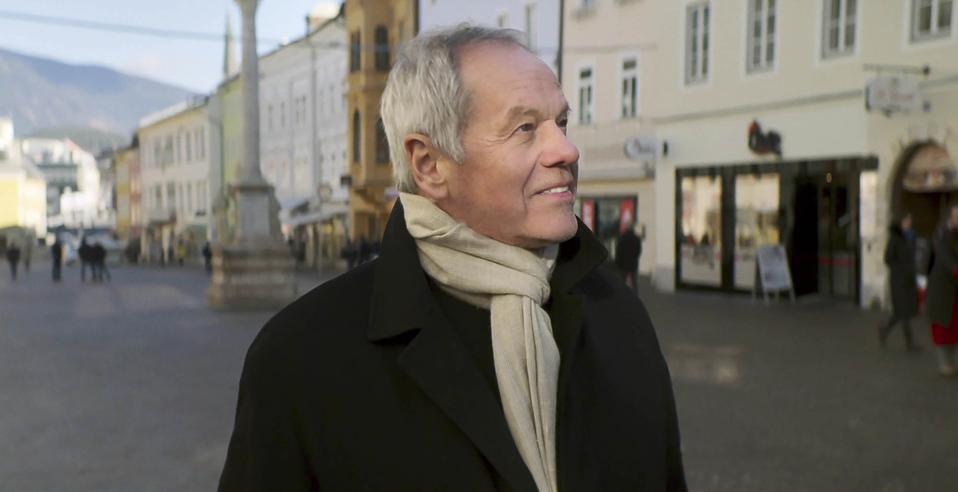 The first time I met Wolfgang Puck was over 30 years ago while he was working at the famed Ma Maison in Southern California. Through decades I have enjoyed his cuisine and hospitality at countless Oscar parties at his legendary original Spago Restaurant in the hills above Sunset Blvd, and then finally at the new digs in Beverly Hills.

His early life is a rollercoaster of pain and heartache. As a teenager in Austria, Wolfgang Puck harnessed his love of cooking to escape the strict rule of his stepfather. Working long hours in kitchens for free finally led him to a famed French restaurant before ultimately landing in America at age 24. In the 70s, Puck began working at Ma Maison, creating a menu utilizing fresh ingredients, and after getting no respect from Ma Maison's owner, Puck took the biggest risk of his career and opened his first restaurant, Spago, which become an instant hit. Puck is the first celebrity chef with his decades of television appearances, having launched an enormous empire of restaurants, cafes, and products worldwide.

With such an acclaimed career, a new documentary will be released June 25 on Disney+, directed by David Gelb and the creators of Chef's Table, titled WOLFGANG. It is a raw look at the legend as he deals with a life of rags to riches and documents his return home to Austria to recount his troubled childhood.

I spent several hours with Wolfgang at his restaurant at the Hotel Bel Air, as he took me into the large kitchen to prepare some Austrian specialties, including his mouth-watering Weinerchnitzel (full video cooking lesson below). I enjoyed a fantastic sit-down meal with the gregarious Chef for a memorable afternoon talking about his life and what lies ahead for his future. I also sat down with Wolfgang's son Byron Puck, who heads up the stunning new Merois Restaurant on the rooftop of the Pendry Hotel in West Hollywood, to discuss growing up with the legendary Chef.

Q: Your mother was a professional Chef; how much did she influence you as a child?

WOLFGANG PUCK: "I learned by watching her, but I left my home when I was 14. So every Summer I used to go to the hotel where she worked and spend time in the kitchen. I used to pick up tennis balls at the tennis court there, and they always gave me good tips. We didn't have a car, we didn't have a telephone, and we didn't even have plumbing in the house. We didn't have a refrigerator, just cold milk, and that was it. When I tell that to my kids, they say what do you mean you couldn't turn on the water? And I tell them we had a big bucket of water. If we wanted hot water, they had to heat up on the stove."

What made you decide to leave home at fourteen?

"My stepfather was what I called a terrorist. He was terrible. He always told me I was good for nothing. These days he would have been arrested and put into jail for sure. I think anything was better for me than staying home at that time. I just took everything, went to the train station, and ended up renting a room an hour away from and an elderly lady. I started working at a Hotel, and the Chef there was as crazy as my stepfather, so I went from one bad place to another. After four weeks, we ran out of potatoes; Chef called me over and said, you're good for nothing."

"I went from anguish to anguish. That's when I said; I'm going to jump into the river and die; it's better than going back home. So I was standing on a bridge overlooking the River Drauor, and then all of a sudden, I decided to go back to work the next morning. Maybe the Chef changed his mind. The next day, an older apprentice hid me in the cellar, and I peeled potatoes. When the Chef found me, he grabbed me by my jacket told me to go home to my mother. I said I wasn't leaving. He called the owner, who sent me to his other restaurant nearby. The Chef there was a woman, and she was nice."

When did you decide you wanted to be a Chef?

"I wanted to be an architect, really, but it was too complicated. I would have to go to Vienna and go to school there, and it's expensive. So I couldn't do that because we didn't have the money. So cooking was my second option, and I didn't really like it that much at the beginning, even in a new place. As a kid, I saw my friends playing football or going skiing on the weekend, and I had to work, and it was not fun. And then when I was seventeen, we had this French restaurant come and do a weekly gastronomic week, and they cooked with wine and made escargots, and the chefs used to drink the wine and not use it for cooking."

"I had to cook at different stations. I was working on the vegetable station and then on the salad stage, an appetizer station. In three years, you go through all the different stations and the kitchen basically. And then I said, I want to go to France and see what's really going on there because I was intrigued about what they were making. So I went to Aux Trois Faisans in Dijon and started to work there."

"I wrote to all of the three-star French restaurants in the Michelin Guide asking for a job and offered to work for free. The first chef who said yes was Raymond Thuilier of L'Oustau de Baumanière in Provence. That's when my life changed at the age of 19. My mentor was 70, and he was so passionate about food. I would see him coming in the kitchen with Elizabeth Taylor and then Marcello Mastroianni with George Pompidou. Even Picasso came one day into the kitchen."