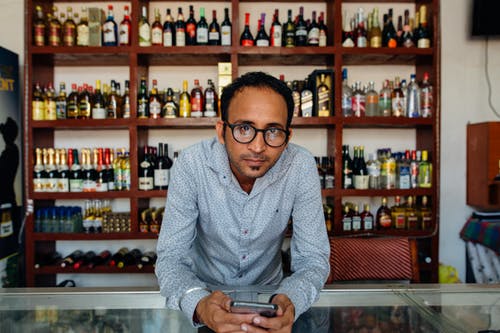 Liquor stores have largely remained open throughout the pandemic, qualifying as essential businesses under most state guidance.

The pandemic pressured wine and liquor stores to limit in-person capacity to decrease the spread of the coronavirus. But these restrictions were not received well in many locations.

As restaurants and stores begin to reopen after months of closure, liquor stores will be forced to make even more extreme adjustments.

While much of the country stayed at home, liquor store owners and employees continued to run these businesses, but with fewer resources. Staffers have had to respond to high-stress incidents more frequently, often the result of people who were frustrated with staying indoors most of the time.

The coronavirus pandemic pressured wine and liquor sellers, which were deemed essential businesses by certain state guidelines, to limit in-person capacity to decrease the spread of the coronavirus. But these restrictions were not received well in many locations. Customers in some cases became enraged by being asked to wear a mask inside, one store manager told CNBC.

“Walk-in and retail business has increased by 22% from March 16th to today,” said Alex Le, co-owner of Nasa Liquor in Houston, Texas. “However, overall business is at average pace, with the loss of bar and restaurant businesses.”

Multiple shop owners and employees told CNBC about the challenges of running a liquor store during a pandemic, including fears about tension with customers and concerns about demand returning to pre-virus levels. Here is what they had to say.

Operating under quarantine
In New York, Park Avenue Liquor Shop, which normally caters to residents in the area, saw many of its usual customers flee the city once the coronavirus struck, said the business’s vice president, Jonathan Goldstein.

The store has still been fulfilling resident orders and delivering, but in fewer quantities than ever. To cope with fewer orders, Goldstein had to lay off a few employees.

“I reduced my numbers and have no idea if business will warrant an increase in the upcoming months,” he said. “The people I still have here are braving the unknown but are being extremely careful.”

In the store, employees wear masks and gloves and sanitize after each transaction.

Other New York liquor establishments, like bars, have offered takeout drinks, resulting in people lining up to order and standing around or near the vicinity to consume it. In normal circumstances, alcohol cannot be consumed in public spaces, including on streets and in parks.

Because of shelter-in-place guidelines and because many stores and restaurants closed to stop the spread of the virus, liquor stores have become a reliable way to break the day’s flow.

“Being open and with people working from home, we are seeing people we’re not used to seeing during the day, whether it be professionals who are usually in the office or teachers who are usually in the classroom,” said Le of Houston-based Nasa Liquors. Le brought on an extra employee to help with inventory and cashier duties and respond to the influx of people entering the store.

“We’ve also implemented sneeze guards, are wiping counters and door handles after every customer, and are limiting to 10 people in at once,” Le told CNBC. “Overall, operational costs now include increased expenditures on cleaning supplies, which is an estimated $200 a month.”

Anna Trueman, wine manager at Bourbon Street Wine and Spirits in Phillipsburg, New Jersey, said her store has also been busier than usual. There are nine stores in the Bourbon Street chain, but her store, located near the border between New Jersey and Pennsylvania, has been fielding people from both states during the pandemic.

For at least eight weeks, “we’ve been experiencing Christmas holiday-level crowds,” Trueman said. “It’s been absolutely insane. We’re all working extra hours and it’s crazy how much busier we are.”

Some liquor shops have also struggled with replenishing supply or selling smaller brands, which have lost ground to the more familiar ones that usually sell out in stores.

“There is no way for a small brand to make itself [known] without hand-selling,” said Goldstein. Hand-selling can consist of offering in-store samples or playing up a smaller brand to make a sale through word of mouth or employee recommendation. These practices have paused in liquor stores across the country to avoid spreading the coronavirus and also to respond to the new demand levels.

The pandemic has affected the supply chain at Nasa Liquor. Once the pandemic hit, distilleries worldwide have either limited or stopped production entirely.

“We often purchase barrels of bespoke whiskey, brandy, or rum from all parts of the world. The challenge is that each geographic location has their own stance on social distancing, reopening, and even guidelines on importing and exporting,” Le said. “We have several of these barrels stuck in pipeline, which we were excited to release in the summer where sales usually increase, but have now been delayed until 2021.”

Trueman of Bourbon Street said she experienced a lot of customer pushback about wearing a mask indoors.

Her shop has marked designated standing areas with X’s to encourage safe social distancing, but customers frequently take no notice of or disregard them, she said. Customers “barely” respect social distancing around other customers, she said, but with staff, they “just walk right up.” Nobody on staff has gotten sick yet, she said.

“When people come in, they don’t necessarily respect the staff here like they would a doctor or a nurse,” Trueman said. “We have lots of gun nuts out here and I’m waiting for someone to walk in who’s got a real chip on his shoulder and start waving their gun around.”

At Park Avenue Liquor Shop, Goldstein took limiting in-store capacity to another level. Instead of allowing people to browse the store’s liquor contents, Goldstein and his employees make suggestions and transactions at the door.

“Just as this virus was making headlines, we became concerned with people roaming throughout the store and touching things, sneezing, etc.,” he wrote in an email to CNBC. “We made a decision to stop them at the entry and if a purchase decision needed some help then we would bring the options to them.”