The New Frontier: Cannabis In Beer 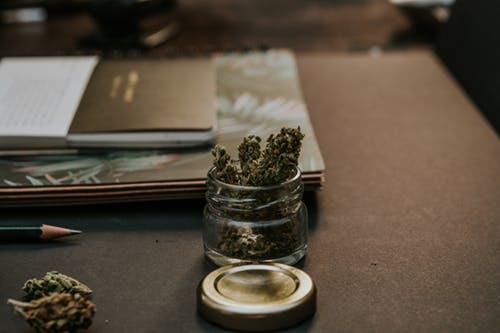 Keith Villa is the creator of Blue Moon Belgian White and an advocate for the intersection of craft beer and cannabis. Here, he walks us through the challenges, and the possibilities, of a future where alcohol isn’t the only mood enhancer in your beer.

If you’ve been around beer for a while, you’ve seen Keith Villa on TV. He’s the guy in the Blue Moon commercial putting the orange wedge on a voluminous glass of their Americanized white beer.

But in early 2018, Villa made a big move and retired from Coors. After 23 years of championing Blue Moon and shepherding the nascent brand from idea to two million barrels of yearly production, Villa (a Colorado native and University of Colorado Boulder alum) found a new challenge and opportunity—bringing non-alcoholic, THC-infused beers to the market in states where cannabis is now legal.

Villa is the not the weed enthusiast you might expect—mid-fifties, clean-cut, PhD in biochemistry, and a career as an industry guy who was not just passionate about his little niche of the beer world, but fanatical about it. Nonetheless, he and his wife, Jodi, (who retired from her career in civil engineering last year as well) have dived head first into a groundbreaking new venture, producing de-alcoholized beer infused with THC (tetrahydrocannabinol), the psychoactive component of marijuana.

Before we jump into the nitty-gritty, the standard disclaimers apply—do not attempt this in any state or jurisdiction where marijuana is not legal and take great care to label what you brew in order to avoid confusing it with non-psychoactive beer and risking excessive consumption. According to the U.S. Drug Enforcement Agency, no overdose deaths have been reported from marijuana, but the effects of overconsumption can be serious, and proper care should be exercised when consuming anything with THC.

Simple Idea
Now that that’s out of the way, back to Villa. The year was 2014, and recreational cannabis had just been legalized in the states of Colorado and Washington, thanks to popular bipartisan ballot initiatives in 2012. The same year, Oregon, Alaska, and Washington, D.C., would also vote for legalization. Villa was working for Coors and fascinated by the potential of the newly legal substance. But working for a large brewer whose TTB license was sacrosanct put Villa in a tough spot—any experimentation would have to be on his own time.

Fast forward to 2018. “This is a perfect point in time,” says Villa, “because I reached that point where I could retire, financially. We’re set, and we’re young enough where we can have a second career where it’s on our own terms and we can control everything, so we decided to launch Ceria Beverages.”

The idea is simple enough—brew a beer, remove the alcohol (because even though cannabis is legal at the state level, alcoholic beverage production in the United States is still governed by the federal TTB, and mixing the alcohol and cannabis streams is strictly forbidden), and infuse with THC, the psychoactive compound in marijuana.

Easy, right? Not so fast. The logistics of doing this at a commercial level are absurd. While homebrewers can simply heat their buds, then dry hop with their cannabis to infuse homemade beer with THC and terpenes, at the commercial level, a brewer must first de-alcoholize their beer. Once that is done, the under 0.05 percent ABV beer must be transported to a cannabis co-packer where the THC is infused, and once that’s completed, the beer must be carbonated and packaged. When you consider that even the most advanced and aggressive co-packer deals in batch sizes under 10 hectoliters (roughly 8.5 bbl), you can see how the economies of scale don’t benefit small producers such as Ceria trying to build a brand in this very young space. The resulting retail price of a THC-infused bottle from Ceria would make brewers of the most expensive New England IPA blush.

Nonetheless, Keith Villa is committed. “We launched Ceria because it gives people an alternative to alcoholic beer,” he says.

Beyond the caloric benefit, beer made with cannabis benefits from the social bias ascribed to liquid consumption. Drinking a beer, whether it contains alcohol or is a de-alcoholized version containing THC, is much more socially acceptable than grabbing a vape pen or smoking a joint.

“At a wedding, you can’t toast the bride and groom with an [edible marijuana] gummy. You toast them with a liquid, so this is the perfect thing to socialize with,” says Villa.

He insists, however, that his interest (and the general direction of the cannabis marketplace) is moving away from extreme consumers and toward more of a gentle mainstream. “If you want to get stoned, there are plenty of ways to do that,” says Villa.

“But if you just want to socialize and have a good time, our beers will do that. Our beer will not get you stoned at all. You’ll feel it, but what you’ll feel is a relaxed mood. It’s like alcohol—if you want to just get drunk, then do shots. By the same token, in the cannabis world, it’s not very social to hook up a dab rig and just get stoned. From our perspective, the socially responsible and socially respectable way to do it is like this—low dose so people can drink several and still be in control.”

The Power of Synergy
One of the bigger buzzwords in the cannabis world today is “entourage effect,” which has nothing to do with the HBO Bro series and everything to do with the synergistic effects of cannabinoids together with terpenes in the cannabis plant. The most interesting piece of this equation, though, is that because Cannabis sativa (marijuana) and Humulus lupulus (hops) are both cousins and members of the Cannabaceae family, they share common traits, such as a preponderance of the same terpenes.

That’s right, the linalool, limonene, geraniol, myrcene, and other terpenes that give hops their character and produce the flavors we love also appear in cannabis and influence the way one’s body reacts to its THC.

Take that one step further and consider what this means for brewing with cannabis in the future—selecting hops with particular terpenes has the potential to amplify or diminish particular effects that cannabis strains might produce. The science is very, very young on the subject, and it may be decades before we really understand the intricate ways in which these chemical components interact in our bodies and brains, but the potential is incredible.

“What a lot of people don’t realize,” says Villa, “is that in the cannabis plant, there are more than a hundred cannabinoids, of which the most well-known are THC (tetrahydrocannabinol) and CBD (cannabidiol). But there are a lot of others that have been identified but haven’t been studied to the point of understanding what they do to the human body. Some, such as THC, give you that euphoric feeling. Some, such as CBD, limit pain. And the others—some act like caffeine and give you energy. Some are relaxing, some aphrodisiacs, some give you the munchies, and some remove the munchies and reduce your appetite.”

This potential for building a future generation of beverages and products that don’t simply use ingredients to impact taste but also use them to affect the mental experience is propelling more research in the field, but as Villa says, “at this point most people don’t understand how these various cannabinoids work together. If you mention the entourage effect, you might as well be speaking Chinese. It becomes complicated really fast.”

Ceria uses ingredients such as orange peel (which contains limonene) and coriander (a great source of linalool) in a basic attempt to steer the experience of THC in their beer toward a more relaxing buzz. Future beer releases, such as their upcoming IPA, will employ different terpenes derived from hopping regimens to push the experience in a more active direction.

“You almost literally can design cannabis beer to guide you in any way you want,” says Villa. “To me, that’s the ultimate homebrewing. To make a beer for yourself, your family, your friends that makes you happy. Brewing with cannabis and varietals and building an experience with terpenes—when homebrewers get that little bit of education about cannabis and what it can do, then all of a sudden you light that spark, and we’re going to see a whole new revolution.” Ceria Beverage 19-01-25 CBB Issue32 images-227

What’s Next
The cannabis industry is starting to look a lot like the brewing industry, as big players (including a number of large-scale brewers such as Constellation and AB-InBev) make big investments into Canadian-based cannabis companies, preparing for the day when those companies can take advantage of legalization in the United States. But what this future looks like is still unclear.

Consumption modes can and will most likely shift from smoked cannabis toward healthier options, and social habits such as holding a drink in one’s hand that have accompanied humans for millennia won’t disappear overnight. But innovation in the cannabis market is happening at a small scale familiar to craft brewers, and time will tell how the battle of large-scale efficiency versus tiny bespoke local production will play out. The exciting thing is that in cannabis, as in craft beer, innovation can come from anywhere—a grower in their garage or a well-funded corporate lab.

“It’s all about creating your future,” says Villa. “Years ago when the Coors family handed over the brewery to Leo Kiely—he was the first non-Coors family member to head that brewery—he said to me once, ‘Don’t let the future control who you are and what you do. You have to create the future.’ That’s always stuck with me. That’s what Blue Moon did; that’s what Ceria is doing. We’re trying to envision what we think the future is, as far as beer is concerned, and pattern and shape it so that that becomes the future. Blue Moon became the future, and iterations of Ceria will become the future. As brewers, it’s the way we can create our own future.”